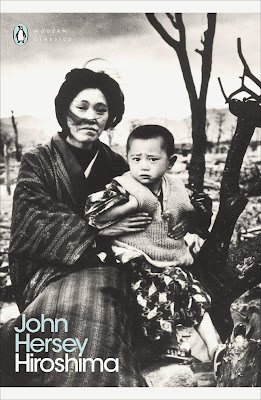 When two atomic bombs were dropped on the Japanese cities of Hiroshima and Nagasaki in August 1945, few people had any clue about what they were. In the aftermath, newspapers were full of the scientific achievement - the new atomic age that had been opened up. There was little or no space for what happened to the people living in the cities themselves. In May 1946, The New Yorker magazine sent journalist and author John Hersey to Hiroshima to report on what happened. His 30,000 word article, simply titled Hiroshima, was published as the sole story in the August 1946 edition, a year after the bomb dropped.

It was an instant success. The story was syndicated globally, as millions of people wanted to read this honest, moving and shocking story of the horror of the atom bomb. In the UK, were paper rationing meant that newspapers couldn't reprint the story, a quick Penguin edition was produced in 250,000 copies. Readers devoured it.

Today, we know much more about atom bombs. Nearly 80 years later, with the threat of global nuclear war hanging over several generations heads since 1945, we are much more used to the idea of what this new technology could do. But then the reality was shocking to the public. Hersey tells the story through a handful of main characters, explaining what each of them in turn did on the day. How they were thrown across the room, or broken bones and in the initial blast. How in shock they tried to find friends, family, children, colleagues. The main characters interact with a wider group of people, whose stories of lost children, wounded soldiers, vomiting refugees and the complete break down of authority are terrifying in their authenticity.

Hersey carefully chose who formed the basis for this account. Five are Japanese, a hospital doctor, an office worker, a Protestant clergyman and a older woman. Another was a German Catholic missionary. Their different accounts are at times upsetting, and shocking. What I was struck by was how people quickly organised - the Dr Sasaki set up emergency medical aid in his hospital, though he was utterly overwhelmed by the thousands who came for help; the man who ferried people back and forth across a river or fetched water for hundreds of thirsty wounded. At the same time there are individual moments that help clarify the horror - the doctor loses his glasses, the clergyman bumps into his wife and child by accident.

Hersey shows through these stories the utter overwhelming nature of atomic war. A city is flattened almost instantaneously. The inhabitants how now way to understand what has happened. There are no supplies and promised help from the authorities fails to materialise for days. At the same time, after the initial shock, people organise to help and support each other, though the reality of radiation sickness doesn't become clear for months - it took half a year before the Red Cross hospital was "back to normal". Before it was fully functioning, the directors "put up a new yellow brick veneer façade" to ensure that it looked the part.

I wonderedwhether the book's impact went much further than just explaining the reality of the bomb. The Japanese had been demonised in the most racist way since Pearl Harbour. But in Hiroshima the Japanese are ordinary men and women, exactly like ordinary Americans. The reading public might have found their ideas challenged in ways that were far greater than simply fearing they might be victims of atomic war.

When I finished Hiroshima I hoped a new generation would read it, and our anti-war and peace movements grow in strength once again. But I also agreed with Dr Sasaki, who said afterwards "I see they are holding a trial for war criminals in Tokyo... I think they ought to try the men who decided to use the bomb and they should hang them all."

Posted by Resolute Reader at 11:54 am

"I see they are holding a trial for war criminals in Tokyo... I think they ought to try the men who decided to use the bomb and they should hang them all."

In Errol Morris's film The Fog of War, Robert McNamara, talking not about the atom bomb but about the extensive firebombing campaign before it, said that, had the U.S. lost, he and his commanding officer, General Curtis LeMay, would have been tried as war criminals. The same is true of the atom bomb and of Harry Truman.

Now that I'm on WP, I see why people often didn't leave comments on my blogger blog. First there is no app that makes commenting easy on my phone, like WP has (and I use all the time), which means I have to wait to be at my laptop to write comments on blogger posts. And sometimes, I simply want to let you know I've stopped by, enjoyed your post, hope to read this book myself one day, but have nothing more to say. A LIKE button would be so handy for times like this on blogger!