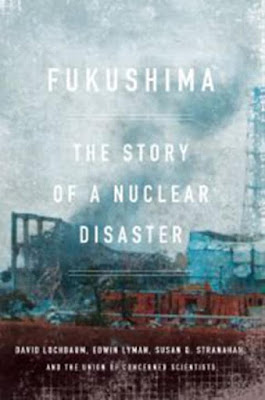 The imminent 10th anniversary of the Fukushima nuclear disaster combined with growing advocacy for nuclear power led me to this interesting study of the accident that took place in March 2011. Ten years ago, a major earthquake off the coast of Japan and a resultant tidal wave caused extensive damage to the coast. Almost 16,000 lives were lost. But that destruction was overshadowed by the crisis at Fukushima when the nuclear plant and its four reactors suffered a major malfunction.

This book tells the detailed story of what took happened as flooding damaged critical parts of the plant, destroyed infrastructure, cut power and damaged the physical fabric of the reactors. Various reviews quoted on the book describe this in the style of a thriller promising the reader a "blow-by-blow account" of the disaster. While there is plenty of moment by moment coverage, the book is actually a compelling history as well as a detailed explanation of events. It places the disaster in the context of decades of Japanese and US nuclear policy and analyses the what it meant for nuclear power going forward.

But the main part of the book is the disaster itself and what led to it happening. The trigger for this was of course, the tsunami, but the reason that the disaster unfolded as it did - threatening the health of millions of people and causing significant pollution (as well as social and economic disruption), wasthe decisions that were made long before by TEPCO, the plant's owners. As the disaster unfolded, cost-saving decisions made years before about equipment, training and expertise took their toll. For instance despite the presence of fire-engines that could be used to pump water onto the reactors to cool them, "no plant work knew how to operate the fire engines". Readers will find themselves exasperated as repeated examples reoccur. Referring to the US experience, but in a point that could be applied to Japan, the authors point out that "when the question  was 'safety' versus 'economics' it seemed that economics often won." The lack of power on the site meant that cooling and pumping, as well as simple checking of instruments was impossible. At one point over the PA system managers at the wrecked nuclear plant asked workers to lend them money to "buy some batteries" as they had used all the ones in cars and trucks at the site.

But these technical issues compounded a bigger problem. The nuclear industry in Japan had systematically downplayed the potential for disaster and argued that the complex combination of factors that happened at Fukushima - earthquake, tsunami and total power failure for many hours - would not happen. In particular they ignored, or downplayed, scientists who argued that the earthquake risk was significantly higher. TEPCO itself had a "well-known history of covering up safety problems". In the aftermath section of the Japanese government also deliberately "withheld information" and downplayed dangers from the public.

The authors make clear that the combination of events at Fukushima were rare. But they were neither unpredictable nor unexpected. And those that argue "it couldn't happen here" in relation to nuclear plants elsewhere are guilty of obfuscation. Dozens of US nuclear plants are downrange from huge dams, and while tsunamis might not happen a broken dam could lead to significant damage and potential nuclear disaster. Discussing both Fukushima and Three Mile Island the authors conclude that both "followed from one common and dangerous belief: that an accident like TMI or Fukushima Daiichi, just could not happen".

As climate change leads to worsening and more intense extreme weather, the potential threats to nuclear plants multiple. But so do the risks associated with a technology that has exponential dangers when compared to other forms of energy danger. In particular when running the nuclear industry for profit, particularly given "cozy", historic, links between "regulators and industry".

The best bits of this book are those that deal with the disaster and the historic context which shaped what happened in the aftermath of the earthquake. The other chapters which explore the reaction from the nuclear industry highlight real problems, but are not as accessible. In particular their focus on the United States' nuclear industry and regulatory bodies means that readers elsewhere might find themselves a little bored. On the other hand the importance of the US situation in shaping policy elsewhere cannot be ignored. It should be noted though that this book is not an anti-nuclear power book - the authors may hold that position, but the book is not intended as a comprehensive dismissal of the nuclear argument. There is little here about the problem of nuclear waste for instance. Instead the book focuses primarily on the question of safety via the lessons of Fukushima. However, these conclusions are damning.

Opponents and sceptics of nuclear power like myself will likely have already made their own minds up. But the authors' argue two things. Firstly that current policy and practice in the nuclear industry is unsafe, particularly because it is based on insufficient and simplistic models of what plants need to withstand. Secondly they argue that there needs to be proper public scrutiny of the nuclear industry and the public need to be well informed on the subject. As the book shows as each nuclear disaster disappears into the mists of time, its lessons and the fears they engendered shrink, allowing the industry to recover and backtrack. This book is a readable account of what happened in Japan, and an excellent introduction to the dangers of nuclear power as well as the limitations of current government and corporate policy. It ought to be read to keep the memories and experiences alive for a new generation of the public engaged in debates around energy policy.

Walker - Three Mile Island: A Nuclear Crisis in Historical Perspective
Caldicott - Nuclear Power is not the Answer
Commoner - The Poverty of Power: Energy & the economic crisis

Posted by Resolute Reader at 7:11 pm