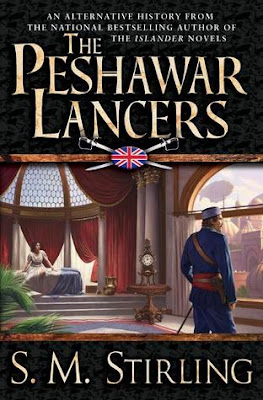 The best thing about this overlong alternative history novel is its premise. In the 1870s a swarm of comets hits the Earth bringing in its wake "nuclear winter" for much of the northern hemisphere. The European powers lose their national homelands, but cling on and relocate to their colonies. England's royal family, government and much of its wealthier classes move to India where they survive a Second Mutiny and establish a new powerbase. The novel extends, in sort of a steampunk atmosphere, the "Great Game" into the 20th century that is created through these events.

The basis for the novel is great. The execution is terrible. The author might be commended for having many female and non-white characters, but they are one-dimensional and cliched. The hero of the book, the gallant, handsome and strong Captain Athelstane King, speaks multiple languages, is a master of disguise and commands the love of the troops he commands. A sort of Flashman type figure (the author makes a handful of knowing references to Sir Harry) without the cowardice, King and his sister prevent a dastardly Russian plot involving airships to assassinate the British Royal Family and provoke war.

But the book is horrendously over-written and the plot drags on with needless exposition that only serves to increase the word count. The author has a tendency to try and give cultural authenticity by using Punjabi or Hindu words in the text, but these aren't explained and just create confusion. The multiple appendices at the back do round out the book's universe, but they aren't necessary.

I was also uncomfortable with what I saw as unfortunate stereotypes of many of the characters who aren't of a European heritage. The Russians are Satan worshiping cannibals, because that's how they survived the "fall", the people from India and Afghanistan are subservient or ill-educated rogues, always ready to slit throats. These stereotypes turn into predictable plot points. I must also mention the fact that one important female character (who has a youthful ability to foretell the future, but will die when losing it) is only saved because her condition is fixed by King taking her virginity. Really people, we ought to have moved on from this sort of bollocks.

At the end of the novel everything is resolved through manly sacrifice by (white) heroes in the face of the beastly and treacherous behaviour by (non-white) bad guys. Every one lives happily ever after and all the heroines marry princes.

Sadly the book doesn't live up to its promise. The story is over-long and feels crude. The ending is laughable, and there are too many stereotypes and not a few frankly offensive plot points. Skip this entirely.

Posted by Resolute Reader at 8:32 pm