Larissa Reisner - The Hammer and the Anvil 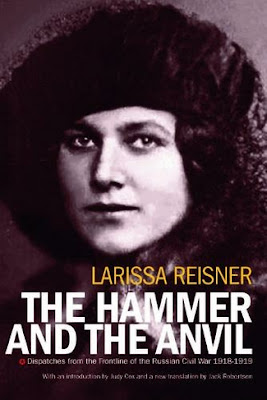 Larissa Reisner was a phenomenal Russian revolutionary activist, author and journalist. She is perhaps best known to English speaking socialists through her wonderful book Hamburg at the Barricades which is based on her experiences in Germany in the latter part of the Revolution there. Despite dying at a young age, Reisner's output was enormous, though little of it has been translated. This new collection of writing is based on new translations of her collected work kept in the British Library and is a must read for any socialist interested in the Russian Revolution and the aftermath.

The book focuses on a key battle in the Russian Civil War when the Red Army managed to turn the tide against the Whites. It was a gruesome conflict which saw the White counter-revolutionaries commit mass murder against anyone suspected of Communist sympathies, including non-combatants, women and children. Reisner reported on this war, but also took part. There is an incredible story of her own escape from interrogation by the Whites while spying on them. She also details the trials of being a refugee following the fall of Kazan, and refers in passing to many key Bolshevik fighters of the era. Her accounts of naval engagements are both exciting and moving, as she describes the bravery and horror of the underequipped, outnumbered Red Army forces inspired by revolutionary ideals to defend their revolution. This is revolutionary history that never forgets the role and the sacrifices of ordinary people.

In fact, her introduction, a deeply moving piece is geared precisely toward telling the story to those who weren't there and cannot comprehend what took place. She dedicates it to the "students of the Workers Faculty" who are, she speculates more mechanical in their understanding of revolutionary politics... and she urges them to "read to the end how it really was, from Kazan to Enzeli, the roar of victory,. the pain of defeat. On the Volga, on the River Kama and on the Caspian Sea during the Great Russian Revolution. That's all."

In his autobiography Leon Trotsky wrote about Reisner, that she "flashed across the revolutionary sky like a burning meteor, blinding many... Her sketches about the civil war are literature. With equal gusto she would write about the Ural industries and the rising of the workers in the Ruhr. She was anxious to know and to see all and to take part in everything."

The Hammer and the Anvil certainly demonstrates this. One thing that stands out is the way that Reisner shows the Revolution as a mass event - involving enormous numbers of people and ideas that swell in the hearts of millions. But she also knows that the individuals who make up the masses matter.

There is no history whch reflects upon and appreciates the great and small feats performed daily by the sailors of the Volga Military Flotilla. The names of those who by their voluntary discipline , their intrepidity and modesty helped to created a new fleet are hardly even known.

Of course, individuals do not make history. However, in Russia we had so few people and characters of his calibre by and large. It was so difficult for them to break through the undergrowth of old and new bureaucracy that they rarely found themselves in the real-life, life-and-death struggle... it's because the Revolution had men like this, men in the highest sense of the word, that Russia is able to rally and recover... At decisive movements they stood out from the general mass, and all of them displayed an authority - a full, genuine authority. They were aware of their heroic task and by their actions were able to rouse the rest of the wavering and pliable masses.

Reisner's genius is to make this sweeping statement real by then telling the reader of a few such individuals, such as "easy-going" Yeliseyez, "who hit a boat at a twelve mile distance from a long-range gun. With his blue eyes, and no eyelashes - singed every time the gun discharges - always fixed upon somewhere far in the distance."

Readers familiar with Trotsky will find in these pages more information on key figures - like the sailor Comrade Markin - who is referred to in Trotsky's account of these battles. In addition to writing by Reisner, the book includes other material, including biographical material on key figures, poetry and the relevant section of Trotsky's biography (particularly the famous section on his military train). The defence of Sviyazhsk, a last ditched fight against the Reds, which Trotsky played a key role in, forms a central part of these extracts and Reisner's account. It's interesting to read them side by side.

If I have one criticism of this collection its that I wanted to read more Reisner - though I appreciated the other material gathered here. Socialists interested in revolutionary history and the Civil War in particular will find much new material here. But in Reisner's writing they'll also find inspiration and, it must be said, a lesson in revolutionary journalism.

Hear the editor and translator speak about Larissa Reisner and the book here.

Posted by Resolute Reader at 9:05 pm