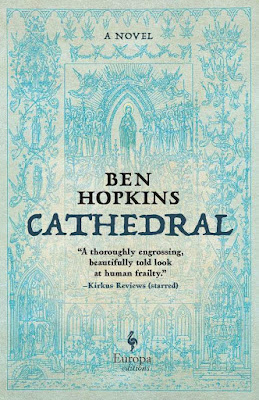 Covering 50 years in the history of a small town in the middle of 13th century German Rhineland this is an epic novel in every way. As the title suggests, the book centres on the construction of the massive cathedral in Hagenburg, a project begun by an aging Bishop who wants it to be his legacy. This sets the tone for the book's great scale, but around the cathedral spins a cast of characters whose lives, loves and scheming draw the reader into the world of 13th century German fiefdoms. Reviews have drawn comparisons with Ken Follet's Pillars of the Earth, another massive book with a cathedrals' construction at its centre. But what makes the books different is that Ben Hopkins' understands wider dynamics in contemporary German society. The rivalries that set people against each other in Hopkins' novel aren't simply jealousies or hatred, they are the tensions created by a feudal system in crisis and the emergence of merchant capitalism.

The book opens with one of its central figures, a young serf coming into the town to pay his taxes. While there the serf borrows money from a Jewish money lender, to buy his freedom, and sets about learning the stonemasons craft. His brother becomes apprenticed to the Jewish lender, and develops a talent for buying low and selling high. Machinations at the top of the town - and conflict between the secular world of the merchants and the religious world of the Bishop's circles form a backdrop to tensions lower down. The cathedral itself becomes a venue for these arguments - as merchants and traders use it to organise their business.

But this is still a feudal world. Various lords scheme for wealth and power, and the rise of merchant capital both challenges them and offers them assistance. Hopkins' talent is to weave these different threads together. His writing isn't overly detailed - the chapters are short and tight - but he paints a detailed world. There are some interesting characters. Some strong women, and Hopkins' includes a gay character in a way that feels extremely realistic. I was most taken however by the way he shows the scheming, malevolence of the lords and bishops. Some of these are truly nasty people. My only gripe is that the authors' focus on the town means he neglects the main source of wealth for all these lords - peasant labour on the land.

Without spoiling too much, there are some surprising twists and deaths, and an excellently depicted medieval urban rising. But I wanted to finish by noting that Hopkins' has done excellent work in showing the way that Jewish communities were both central to urban life, and separate. The antisemitism and pogroms they face are described in brutal detail, but so is the way that the changes in medieval society also have their impact upon the Jewish community. It's a real strength of the Ben Hopkins' writing that a novel based on a Cathedral doesn't solely focus on Christians, but tries to reflect the whole of urban medieval life.

In describing the book as epic I am also mindful of the way the author brings all the threads to a satisfying close at the end, even if a few of them seem a little too abrupt. But, for a book that is over 600 pages long, I was held gripped till the end. Highly recommended.

Posted by Resolute Reader at 8:11 pm