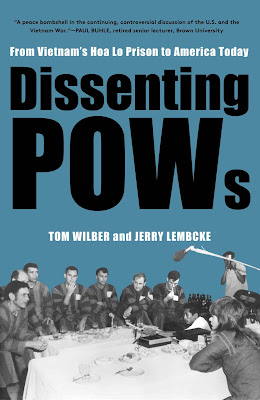 In 2016, during a spat between Donald Trump and Republican Senator John McCain, Trump caused an outcry when he said McCain was not a war hero "because he was captured. I like people who weren’t captured." Outside of the US the furore about this was hard to grasp, because its difficult to understand the myths that have been created around the story of US POWs in Vietnamese prisons during the Vietnam War.

Dissenting POWs explores the way that the story of the POWs was created during and after Vietnam. It argues that there is a much more complex history than the one told by the media, politicians and the US military. Rather than all those POWs continuing the war from captivity as the dominant narrative has it, many openly dissented, some sided with their captors and many openly sided with an anti-war position. Fascinatingly the divisions over this reflected class divisions in the US military, in particular the differences between servicemen in the Navy, Army and Airforce, which reflected wider class differences.

The story of the POWs begins much earlier than Vietnam. After the Korean War there was a persistent belief that captives had been subject to psychological torture to make them unknowing agents for Korea. This was fuelled by the 1962 film The Manchurian Candidate which had a former Korean captive brainwashed into becoming a Communist and an unwitting agent in an assassination attempt against a prominent US politician. The story was so central to Cold War propaganda that during McCain's attempt to get the Republican nomination for President in 2000, right wing critics described him as the Manchurian Candidate.

Tom Wilber and Jerry Lemcke explore the creation of the myth of the pro-war POW, and how this became the dominant story - alongside other prowar, anti-peace myths like the idea there were forgotten POWs ignored by a callous Washington leadership. Interestingly they also show how this myth - that deliberately ignored the way many POWs were critical of the war, or sided with the enemy - began in the POW camps themselves, as more senior ranking captives worked hard, and often violently, to isolate anti-war POWs. Despite their being little or no evidence of torture, systematic violence or abuse of POWs by the Vietnamese, the threat or fear of it, was enough to draw many captives into line. Those POWs who did dissent, especially if they allowed their voices to be used by their captors as propaganda, faced Court Martial and trial on their return - though these cases were rapidly dropped. Nonetheless many former POWs who didn't follow the party line, found themselves ostracised or even attacked at home.

The best parts of the book deal with the experience of the POWs themselves and how many troops developed an anti-war position. For those of us who know little about the American War in Vietnam and the experience of the POWs I felt that the book could have done with more detail on that experience. Indeed, I felt the book was a little too short to really draw out some of the arguments. However there are some fascinating personal accounts based on testimonies and autobiographies. These are particularly interesting when they show the way that the soldiers learnt - from their experiences in Vietnam meeting and fighting Vietnamese people as well as from the anti-war movement.

The authors conclude by arguing that what happened continues to shape politics today, and draw some interesting conclusions about the US military under Trump and Covid today. As they explain:

Fifty years after the war in Vietnam, the acts of conscience displayed there, and the reaction they provoked, continue to drive American political culture. The struggle over the heritage of that experience, waged between those who tell, interpret and decided the uses to which it is put, looms as large as ever in the meaning of the war in the nation's present.

Hastings - Vietnam: An Epic History of a Tragic War
Marlantes - Matterhorn
O'Brien - If I Die In A Combat Zone

Posted by Resolute Reader at 3:42 pm