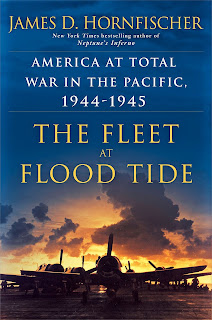 For those of us living in Europe, the history of World War Two tends to be dominated by events in Europe. Even this is distorted - the British remain convinced they won the war against Nazi Germany single-handed, with the story of Russia's huge contribution tending to be relegated to a side-show. In this context the story of the war against Japan in the Pacific is often neglected and even though Britain was involved in Burma, Singapore and elsewhere, British World War Two history tends to neglect events in the greatest ocean on Earth. For many Americans though this was the war and Hornfischer's book is only one of many books that deal with events.

Despite professing to be a history of events from 1944-1945 Hornfischer's book focuses on the Battle of Saipan. The capture of Saipan was a key strategic event for the US military as it would bring the Japanese mainland into bombing range. It was very much total war, with a massive naval contribution supporting the landing of US marines and army units on the island. Hornfischer tells the story well, deftly moving from the strategic overview afforded by commanders such as Vice Admiral Raymond A. Spruance, who headed the US Fifth Fleet to the experiences of individual soldiers on the battle field to Japanese civilians and troops on the other side. Spruance is one of a handful of characters that Hornfischer uses to tell the wider story.

The focus on Saipan gives a real sense of a turning point in the war in the Pacific, one that allowed total war to be taken to the Japanese mainland. It marked the end of Japanese air power with the massacre of hundreds of her carrier borne aircraft which shifted the balance of forces heavily towards the US. Important though it is, the emphasis on Saipan means the neglect of other events such as the invasion of Iwo Jima, the capture of Guam and the Battle of Leyte Gulf. These events get a few pages at most (Leyte Gulf was the biggest battle in Naval history, yet is described almost in passing) which tended to distort the history somewhat.

Nonetheless what Hornfischer does well is to give the reader a sense of the vast shift that takes place in US military might in the Pacific in the years after Pearl Harbour. There's a figure depicting annual US naval production by ship-type early in the book, which shows a massive growth in the manufacture of craft. In 1943 the US war economy produced 15 aircraft carriers, with 8 in 1944. Production of landing craft peaked at 38,000 in 1994. It was this enormous production that was to lead to victory in the Pacific.

The final part of the book discusses the most controversial part of the war - the use of atomic weapons. Hornfischer doesn't avoid controversy. For instance, he is honest about the reality of the conflict on the Pacific island which lead to US soldiers repeatedly killing Japanese POWs. Conversely he also makes it clear that the Japanese military were able to encourage Civilians to commit mass suicide through their propaganda and violence. Total war in the Pacific, just as it did on the Eastern Front in Europe led to atrocities on both sides. In this context the use of the atom bomb for Hornfischer was a choice made by commanders who wanted to end the war with minimal casualties on their side. It was also rational by political leaders with an eye on the future world where their emerging economic power would confront the USSR in a potential new conflict. From the point of view of US imperialism the use of the bomb was rational and this book makes it very clear why the US ended World War Two as the most powerful global superpower. While Hornfischer devotes little time discussing whether the targeting of civilians was morally acceptable he doesn't ignore the suffering caused.

My belief that the use of atom bombs was a war crime remained unchanged by the discussion here, though I did find the discussion on the inability of the Japanese high-command to see that they were defeated, and thus agree to surrender, enlightening. I also felt that the discussion of US-Japanese relations after World War Two was a little to rose-tinted. The behaviour of US troops on Okinawa long after the end of the war remains a sour point decades later.

To be fair to the author though I didn't pick up the book with the intention of getting a political and moral discussion of the end of the war, I was after a history of the Pacific War itself. Unfortunately the detailed focus on the Battle of Saipan, interesting and well written though it was, meant that the wider ebb and flow of the conflict was harder to see. That said, this well illustrated book will be of interest to those trying to understand World War Two in all its arenas.