Stephen Jay Gould - Wonderful Life: The Burgess Shale and the Nature of History 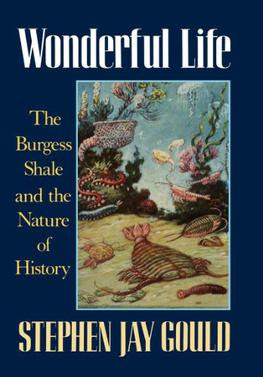 Stephen Jay Gould is a colossus of science. An innovative scientist, a prolific essayist and author he inspired and educated generations about palaeontology, evolution and history. POlitically on the left, his work is suffused with a keen sense of social justice only occasionally descending into political point scoring. Nonetheless Gould's politics shape both the subject matter he is interested in, and how he writes about the material.

I mention this because Wonderful Life is a book about extremely ancient evolutionary history. As such there is little reason for Gould to discuss politics in it at all. But really this book is about an approach to science and history and as such Gould's politics matter a great deal. This is worth emphasising because some recent online reviews of this book tend to emphasise its errors, or how it has been dated by later research. Firstly, this should not be surprising. Few science books published back in 1989 remain exactly correct. No one reads Isaac Newton's writings today looking for scientific explanations that stand up to the rigours of modern science. In fact, one of the themes of Wonderful Life is Gould's argument that historic scientific work must not be ignored, even it is incorrect, as it is part of contributing to more recent developments.

There is irony in one aspect of this. Gould discusses how the Burgess Shale, a geological feature that forms the centrepiece of the book's discussion contains fossils of the tiny creature Hallucigenia. Gould explains how this was wrongly described by the great US scientist Charles Doolittle Walcott who was the key figure in early studies of the Burgess Shale. In the book Gould shows how Walcott's construction of Hallucigenia was completely wrong. In fact much of the book is a discussion of why Walcott made such mistakes. But today we know that the reconstruction by a later scientist Conway Morris celebrated in Gould's book is also incorrect. To be fair to Gould he also points out that Hallucigenia is so "peculiar" that Conway Morris' interpretation might be incorrect. Today we know that Hallucigenia is a very different creature from either description. Those of you reading Wonderful Life or even just this review, will get a sense of the debate from this fascinating short video.

Secondly to only emphasise how Wonderful Life is no longer accurate is to utterly misunderstand the point of the book. What Gould is trying to do is understand how natural history can be studied and why scientists make mistakes. What cultural, social and political conditions allow a brilliant scientist like Walcott to get the Burgess Shale completely wrong. Of course, at the same time Gould is putting across his own version of that history - explaining the history, evolution and extinction of the fossil animals found in the rock - through an examination of the process of science. It is this aspect to Wonderful Life that stands the test of time and must not be dismissed.

The problem for Walcott is that a close examination of the Burgess Shale fossils proved, beyond doubt, that his understanding of evolution was incorrect. Gould explains that the fossils demonstrate that evolution is not linear, but contingent on externalities, which mean that many species do not make the cut. Of the dozens of creatures found in the Burgess Shale fossils, many have no contemporary (or even more recent) descendants. As Gould explains, Walcott

interpreted his new fauna in the light of thrity previous years spent (largely in frustration) trying to prove the artifact theory, as an ultimate tribute to Darwin from a Cambrian geologist. He could not grant Burgess organisms the uniqueness that seems so evidence to us today because a raft of new phyla would have threatened his most cherished belief. If evolution could produce ten new Cambrian phyla and then wipe them out just as quickly, then what about the surviving Cambrian groups? Why should they have ha a long and honourable Precambrian pedigree? Why should they not have originated just before the Cambrian, as the fossil record, read literally, seems to indicate, and as the fast-transition theory proposes? This argument... is a death knell for the artifact theory.

Gould argues for a different approach:

The resolution of history must be rooted in the reconstruction of past events themselves - in their own terms - based on narrative evidence of their own unique phenomena. No law guaranteed the demise of Wiwaxia, but some complex set of events conspired to assure this result - and we may be able to recover the causes if, by good fortune, sufficient evidence lies record in our spotty geological record.

Wonderful Life is the source of a famous quote by Gould:

Wind back the tape of life to the early days of the Burgess Shale; let it play again from an identical starting point, and the chance becomes vanishingly small that anything like human intelligence would grace the replay.

His argument is that evolution doesn't proceed by stages to an specific goal that can be predicted in advance. What the Burgess fossils show us is that chance means that many different outcomes are possible. While there is much still to learn, and some of this book is dated - there is a lot of material here to help us get our heads around how evolution has worked, and what that means for our own place in the contemporary eco-system.

Fortey - Survivors: The Animals and Plants that Time has Left Behind
Fortey - The Earth: An Intimate History
Fortey - Trilobite! Eyewitness to Evolution
Maddox - Reading the Rocks
Cadbury - The Dinosaur Hunters
Desmond & Moore - Darwin's Sacred Cause

Posted by Resolute Reader at 6:11 pm

What a wonderful trip down memory lane you've just taken me.

I read a number of Gould's books back in the 90's with a great deal of pleasure. It is, as you say, his approach to scientific learning and the way he applied scientific principles that was so enlightening. One would expect new information to come to light with more research and study. Knowledge and learning are not a static things. They also evolve. I'm sure if Gould were still alive, he would be writing revised editions of his older work to highlight the new insights.