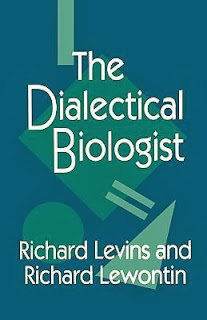 At first glance, some might think this is an extremely odd title for a book. After all, dialectics is essentially a philosophical term and biology is, well, science. But the author's purpose in bringing together these essays is more to argue that a dialectical approach to science, both in terms of scientific research and practice, as well as understanding the position of science in society, benefits immensely from a dialectical method. Indeed, science, they argue, is better when practiced dialectically.

So what does that mean? Firstly the authors begin from a radical position. "We believe that science, in all its sense, is a social process that both causes and is caused by social organisation." This is very different to the majority of other scientists, who often, as the authors argue, separate out specific points of science from wider contexts, social and indeed scientific. Some of the problems with this approach are outlined in this quote from the authors, pointing out the dangers in looking at only on aspect of an organisms biology:

"The mammalian ear is obviously an organ of hearing, but it has other properties as well. For acoustic reasons it is a thin organ with a large surface area, the blood vessels cannot be deep, so heat is very readily lost. In fact, desert mammals often have extraordinarily large ears that serve as organs of temperature regulation. In this case a physical by-product of the evolution of an organ had properties that themselves became the objects of [evolutionary] selection under the special conditions of the desert."

By only looking at one aspect of a scientific question, one can miss wider questions. A similar problem can occur when trying to understand organisms outside of wider environments. While this approach can be useful, isolating particular aspects of behaviour or biology to illuminate others,

"it eventually becomes an obstacle to further understanding; the division of the world into mutually exclusive categories may be logically satisfying, but in scientific activity no nontrivial classifications seem to be really mutually exclusive. Eventually their interpenetration becomes a primary concern of further research."

So, in terms of understanding organisms in the wider world;

"'Environment' cannot be understood merely as surroundings, not matter how dynamically. It is also way of life; the activity of the organism sets the stage for its own evolution."

The benefit of this book is the authors root such statements in clear examples, so,

The dialectical interaction between different aspects of the natural world here is merely one aspect of the book. Other sections look at the way that science within capitalist society is shaped by and shapes wider economic questions which in turn shape scientific and research needs. There is a particularly useful chapter here on agriculture.

Though is book is dated in parts, due to the data for some chapters stemming from the 1970s or 80s. The general political arguments hold sway and it should remain required reading for those interested in science and society. Interestingly the authors display an excellent sense of humour and the inclusion of work by Isidore Nabi, a fake scientist created to expose problems of mechanical scientific approaches are a welcome break from the more difficult chapters.

Molyneux - The Point Is To Change It
Carson - Silent Spring
Posted by Resolute Reader at 9:12 am