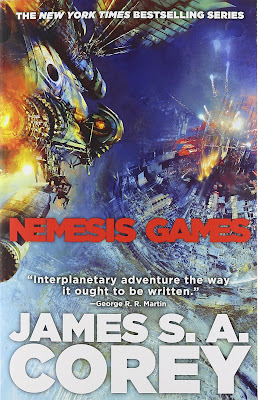 Volume five of the Expanse novels is a very different work. For a start it feels less self-contained, more of a bridge between the epic setting of the scenes in the first novels and the later half of the series. In the first half we learn how the various factions of humanity, spread through the inner solar system and the minor planets suddenly break out into the wider galaxy, provoking war, economic chaos and depopulation as people rush for new galactic real estate.

Nemesis Games however returns to the solar system. Our heroes from the previous books, James Holden's crew, are recovering from their adventures and while their spaceship is reparied, they take leave to return to friends, family and secrets, from their previous lives. Scattered between Mars, Earth and the inner solar system, they are caught on the hop as Earth is attacked by a massive attack. Millions die, and Holden's crew have to find their way back to each other while surviving the catastrophe and the subsequent battle for political supremacy that takes place after Earth is almost wiped out.

It's another decent novel in the series, a quick read that feels more like an episodic TV series. Enjoyable for fans of the previous works, even if it felt a little like filler for the wider story arc.

Posted by Resolute Reader at 9:44 am

I've tried to get into the Expanse novels many, many times and I keep bouncing off. They're too much like episodic TV -- I say that, though, as someone that really enjoys the show. I hear even that the later books come off more like very detailed outlines then like actual books.

If you enjoy fantasy, and find the time, I strongly recommend either of Daniel Abraham's -- he is the "James S." half of James S.A. Corey -- solo fantasy series'. Both are more character-driven, and more intelligent.