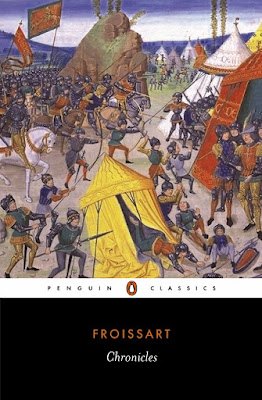 Jean Froissart's Chronicles are his relatively contemporary, and sometimes eyewitness, accounts of events around the Hundred Years War. There is something remarkably special about reading about events like the Battles of Crecy or Poitiers, or the Jacquerie and the English Rising by someone writing down oral accounts or stories passed on by witnesses.

Froissart was a historian, writer, poet and courtier who lived around 1337 to 1405. His life covered much of the key period of the Hundred Years War and we are blessed that Froissart was an able writer, with an eye for detail and scandal, as well as a compulsion to put it all down on paper. Some early parts of The Chronicles are based on earlier writings of the French chronicler Jean Le Bel, but the bulk of Froissart's work is notes made from interviews with eyewitnesses. They are entertaining, illuminating and at times very insightful. That said, they aren't always historically accurate.

The modern reader might find Froissart somewhat of a snob. He seems obsessed with chivalry, and details of courtly events. His eyewitness account of a jousting tournament is fascinating, though the edition I read cuts it short because the detail of shields, emblems, and how each individual joust proceeded is repetitive. "Their lances were stout and did not break, but curved up, and the powerful thrusts by strong arms stopped the horses dead in their tracks. Both knights then went back to their own ends, without dropping their lances..." But reading these descriptions you realise that this information is of the greatest importance - the descriptions of chivalric behaviour, the details of who won and lost, are crucial for Froissart's audience and those who commissioned him.

While it is the big events that Froissart describes, or saw, that often draw readers attention - the Peasants Revolt, or the fall of Richard II are examples, I was also struck by other details - such as when Froissart talks about staying in an inn or a casual discussion. Whether or not Froissart is completely accurate in his description of the Papal schism (he isn't), his account of the role of the Roman population again gives a sense of what he would have thought important.

Which brings me to the two events I was most interested in - Froissart's descriptions of two Peasants Revolts, one in France and one in England. I've previously read, and re-read, his accounts of the 1381 when the English Rising shook Richard II's kingdom to its foundations. They are similar in tone to his writings about the Jacquerie a few decades earlier. In both cases Froissart demonstrates both a hatred and a fear of the masses, whom he understands as being irrationally angry and violent. The French rebels, were

evil men, who had come together without leaders or arms, pillaged and burned everything and violated and killed all the ladies and girls without mercy, like mad dogs. Their barbarous acts were worse than anything that ever took place between Christians and Saracens. Never did men commits such vile deeds.

He goes on to say that these deeds were so awful he "could never bring myself to write down the horrible and shameful things which they did to the ladies".

Most striking, for me, about these passages is less the violence (which Froissart exaggerates) and more the reference to the rebels rising "without leaders". Here he is upset at the disordering of the medieval world. The rebels aren't, in his view, just rebelling, they are also doing so in ways that destroy hierarchies. Ironically, as Justine Firnhaber-Baker has recently shown, the rebels did have leaders - chosen from below (as they did in 1381 in England). Though Froissart would no doubt have found this equally unpalatable.

Froissart's Chronicles have been popular through the ages precisely because his eye for detail makes them extremely entertaining. Many of the events he describes are some of the most important of the era, but readers will also be struck that the Chronicler is doing more than writing history - he is writing a version of it that fits the prejudices and class interests of his aristocratic audience. It is this that makes the book truly fascinating.

Posted by Resolute Reader at 9:03 pm