Justine Firnhaber-Baker - The Jacquerie of 1358: A French Peasants' Revolt 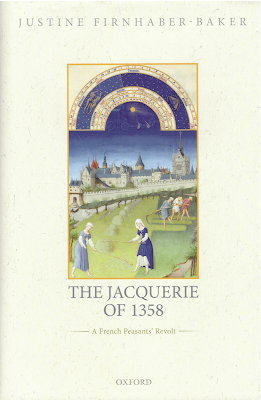 Reading Jean Froissart's Chronicles of the Hundred Years War recently I was struck by the vehemence with which he describes participants in the Jacquerie - the peasant revolt that shook France. The rising took place in the political chaos that followed the French defeat at the Battle of Poitiers where the English captured the French king. For Froissart, and other contemporaries, the Jacquerie were "strange and terrible happenings"  where "evil men, who had come together without leaders or arms, pillaged and burned everything and violated and killed all the ladies and girls without mercy, like mad dogs".

Such language matches that with which Froissart and contemporary chroniclers describe rebellions in England and I wondered at other parallels. So I was very excited to learn about Justine Firnhaber-Baker's new book. As the reader quickly gathers from Firnhaber-Baker's extensive notes and bibliography there are no shortage of books and articles on the 1358 events in France. But her book fills an obvious gap for English readers - an accessible and scholarly study of the events. She begins by summarising what took place at the end of May 1358:

As summer approached and people prepared to celebrate the Feast of Corpus Christi, thousands of French villagers revolted. In the Île-de-France north of Paris, Normandy to its west, Picardy and Champagne to its east, and further afield, they attached the nobilities castles and manor houses, burning them down and destroying or stealing their contents. They killed noblemen and assaulted their families. According to some reports, they event killed noble children and gang-raped noblewomen, murdering some pregnant ones. On 10 June at the eastern city of Meaux, they allied with urban commoners and troops from Paris, itself in rebellion against the crown, in order to attack a castle on the Marne River... there they were defeated. The castle's noble garrison chased down those who managed to flee and slaughtered them 'like pigs'.

The Jacquerie sent shivers down the spines of nobility throughout Europe. Yet, unlike some other medieval rebellions, such as the English Rising of 1381, source material is much more scarce. Firnhaber-Baker has scoured it to explore the detail behind the crude propaganda of Froissart and others, and try and answer key questions. Why did the villagers revolt? Why in 1358 and not before? What were the links between national politics and local issues? How barbaric were the rebels? How violent was the crushing.

Key to answering these questions is the author's central argument that the motivations of the rebels cannot be separated from wider politics. We must not think of medieval villagers as being ignorant masses unconcerned with wider issues. In fact, it's precisely the interaction between "national politics" and local concerns (economic and political) that drove English rebellions such as those of Wat Tyler, Jack Cade, Robert Kett and more complex risings such as the Pilgrimage of Grace. So Firnhaber-Baker quotes the Royal Chronicler who said of the people in Paris and it's countryside were "greatly dismayed, for they feared that there would be conflict between the two lords leading to the destruction of the country."

In other words, the political crisis at the top of French society that followed the capture of Jean II at Poitiers, cascaded down through society among people who could expect to feel, or had already experienced, the ravages of military forces. For ordinary people the fractures taking place in society were a direct threat because they upset the established order.

So it would be wrong to simply understand the Jacquerie as a economic revolt against oppression, low incomes or serfdom. But simultaneously it would be incorrect to ignore how these issues fed into wider discontent. Which helps explain why the rebellion was sparked when it did. Firnhaber-Baker explains the rebellion itself was not "spontaneous". There is always a tendency after rebellions or uprisings take place for commentators to be surprised at events taking place "out of the blue". It is as true of (say) contemporary riots and protest movements against police racism which seem to come out of nowhere, but reflect deep-seated discontent at racism as it was in 1358 or 1381.

Froissart implies the Jaccquerie began when someone got up and denounced the nobility and called for their destruction, but events had much deeper roots. As Firnhaber-Baker says about the massacre of nobles at Saint-Leu-D'esserent that marks the start of the rebellion:

The rustics may have acted on their own initiative, for while the incident did serve the Parisians' purposes, they do not seem to have anticipated it. Nor were urban sophisticates the only ones to have opinions about politics. Country-folk knew what was happening in Paris, and some were sympathetic. A month earlier, a villager had been killed near Compiegne for telling some noblemen 'Go to Paris, where all you nobles will be killed just as others already have been'.

A "spontaneous" attack on nobles took place because the presence of the nobles themselves in the area was linked by local people to wider political changes. The attack on the nobles would likely have been understood by participants as an engagement by their communities into national events. That latter commentators close to the victorious elite saw this as the result of a few agitators reflects their fears and prejudices. Firnhaber-Baker points out that the rising was not an intended consequence of the actions of peasants in one part of France. "Organising a large-scale rural uprising would have required a prodigious act of imagination on anyone's part", but nontheless it happened. Rural revolt was not unknown in Frnace, but large-scale revolts were "rare".

The scarcity of contemporary sources hides much of the detail of the rising from us. But the lack of political demands on the part of the rebels should not imply that they didn't exist - even if they weren't articulated into a series of "articles" like those of Robert Kett's movement. But there are moments when the "masses" enter onto the historical stage and begin to shape events, even if few participants understand them, at least initially, like this. Leon Trotsky famously wrote in his History of the Russian Revolution:

The most indubitable feature of a revolution is the direct interference of the masses in historical events. In ordinary times the state, be it monarchical or democratic, elevates itself above the nation, and history is made by specialists in that line of business - kings, ministers, bureaucrats, parliamentarians, journalists. But at those crucial moments when the old order becomes no longer endurable to the masses, they break over the barriers excluding them from the political arena, sweep aside their traditional representatives, and create by their own interference the initial groundwork for a new régime. Whether this is good or bad we leave to the judgement of moralists. We ourselves will take the facts as they are given by the objective course of development. The history of a revolution is for us first of all a history of the forcible entrance of the masses into the realm of rulership over their own destiny.

This is not to pretend that the Jacquerie was a precursor of the 1917 Russian Revolution, but rather to try to understand the dynamic that was taking place on the ground. In May 1358 the French masses took to the historical stage, and began to shape national politics.

A few weeks into the Jacquerie there is a key moment when one noble, Charles Navarre appears to switch sides and attacks the rebels, despite them being essentially on the side of his own allies. A crude class analysis, which Firnhaber-Baker rejects, says that this occurs because of him recognising his innate position in French society: "Speculation that Navarre's class consciousness trumped his strategic interest do not jibe with the evidence". Instead she sees it as Navarre's actions as arising out of "political opportunism" rather than "morality or class solidarity". I'm not entirely convinced that the separation is as clear as that - in fact it strikes me that Navarre's opportunism arises precisely out of his class position. It must have been clear to him that the Jacquerie were not going to militarily defeat his enemies, and making his own class position clear through violent repression cannot have harmed his cause, or his opportunism.

Rightly Firnhaber-Baker rejects crude class analyses of peasant revolts. Understanding, for instance, the contradictory roles of local landowners or lords, during (say) the Pilgrimage of Grace or Kett's Rebellion means seeing their class role in the context of wider society - and local as well as national social links. Nonetheless we cannot ignore that there was a class role. So the author is right to say in her conclusion that:

Politics were important, but more so in terms of the practices of mobilisation and coalition-building than ideas about society and government or the objectives of change The social relationships that wove people and communities together or that tore them apart were at least as important in creating the revolt and ensuring its suppression as were opinions on governance, war or even taxation.

But it is also true to say that the revolt would not have happened without class interests and the factional fights within the ruling class, shaping wider changes in society.

If I've focused here on the role of class. I should also point out that Firnhaber-Baker's book is excellent in drawing out other divisions in society. In particular I was impressed by her account of the role of gender. While noting the role that women played in the revolt itself, she also highlights how their wider labour was central to making sure that the rebellion could happen at all.

No rural rebellion could have taken place without someone milking the cows, nursing the babies and weeding the kitchen gardens. If the law was unconcerned by these quotidian labours, the nobles' reaction demonstrates and understanding of their contribution to the uprisings. Considering responsibility to have been corporate and universal, they punished whole villages, without apparent regard to innocence or guilt, age or gender.

It is precisely this nuanced approach that places the Jacquerie in a wider social, political and economic context that makes this book such a delight to read. Justine Firnhaber-Baker's book fills an important gap in the literature and is likely to be the definitive work on these events for many years. I encourage anyone with an interest in rural rebellion and medieval revolts to read it.

Posted by Resolute Reader at 11:17 am