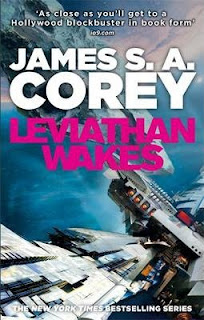 It's always dangerous diving into a novel that is part of an established series, particularly one like the Expanse universe which has already spawned various short stories, a TV series and is unlikely to see a final book any time soon. However I enjoyed Leviathan Wakes a lot. It is not a brilliant piece of science fiction, but it has some great ideas and good characters. In particular it is good at describing a Solar System carved up into differing and contested spheres of influence between Earth, Mars and the "Belt".

The main story follows two groups - one a rough Belter policeman trying to find a kidnapped woman against the backdrop of a war begun by the second group, a crew of spaceship that have accidentally begun an interplanetary war. Throw into the mix a novel form of alien life, intergalactic politics and a neat disregard for any of the major laws of physics and this is a novel that allows spacecraft to swoop around each other guns blazing, and alien technology that can disregard the laws of thermodynamics and gravity at will. If this sort of thing bothers you then you should probably re-read Stephen Hawking's A Brief History of Time, if it doesn't then you are in for a fast paced novel that draws some of its characters from the work of Raymond Chandler.

At times the plot is head together by some mind stretching coincidences and the aforementioned alien technology that can disregard the laws of science. But the writers whose collective pen name is James Corey are talented enough to get away with it, and the reader that reaches the end is likely to be left wanting to read the eight follow up books.