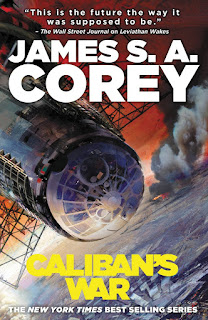 Volume two of James S.A. Corey's Expanse series continues almost where the first book left off. It maintains the fast pace of its predecessor but has a somewhat darker tone. While there is plenty of action and set piece battles these takes place in the context of the political battles going on between Earth, Mars and the Belter systems.

Because the fragile balance between these three political entities has been fundamentally altered by the arrival of an alien intervention in the Solar System. At the end of the last book an alien molecule which seems to be able to self-replicate (and communicate faster than light) took control of Venus. In the few months that have passed Venus has been completely transformed into an incomprehensible structure.

Elsewhere, different factions of human society compete for their own interests. These imperialist maneuvers in space are reshaping the solar system, but bringing interplanetary war closer. When it does finally erupt, a cascade of events takes place that brings the key characters from Leviathan Wakes into the centre of events again - led by the somewhat wooden James Holden.

Other characters are less wooden, such as the rude and belligerent UN senior politician Avasarala who plays politics like chess. The Martian Marine "Bobby" who watched her entire platoon get massacred by an alien living weapon is wooden, but in the way that soldiers are. The interaction between these two is one of the fun things about the book.

The novel itself races along. The authors have a talent for end of chapter cliff hangers, and because alternate chapters switch between viewpoints it means the reader finds themselves reading late into the night. While the plot isn't original, the story is tight and fun and sets up its fans for book three.