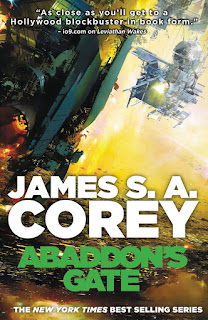 As with its predecesor, volume three of James S.A. Corey's Expanse Series begins almost immediately after the end of the previous novel. The various factions of humanity that are spread through the solar system have launched fleets towards the alien ring structure that has been constructed at the edge of the solar system. These fleets vary from highly powered military craft to smaller vessels with religious and cultural figures in case of first contact.

Jim Holden and his crew who were at the centre of the first two books are pointedly not on their way to the ring, until a suspicious combination of events forces them to join the fleet where they are suddenly thrust into prominence, and simultaneously through the ring.

I'm beginning to understand the popularity of these novels. They feel like well written space soap operas. Characters come and go, plots build to climax and then vanish leaving a blank slate for the next book. Sometimes characters return, but usually there is a great cleansing that removes many of the second tier characters for the next episode. All the key characters remain in place ready to be re-used in the future. This book resolves some outstanding questions about the aliens, but creates many more and leaves them unanswered.

If this sounds like a criticism, it isn't. Abaddon's Gate and its prequels are not great literature, but I don't think the two experienced writers behind the Corey pseudonym intend it to be. If you like science fiction on a grand scale and some intensely described action scenes, as well as a plot line that is clearly worked out on the hoof, then The Expanse will be your cup of tea.