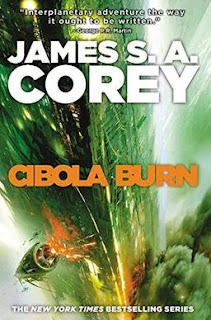 Cibola Burn, volume four of the Expanse Series, continues with the soap-opera like structure of the earlier books. Each chapter's focus is on a different character and while central figures from earlier books return (and seem insanely indestructible) new characters are added and some even make it to the end of the book alive.

Unusually though Cibola Burn isn't set in multiple locations across the universe. This time the setting is a much more claustophobic alien planet. In the previous volume our heroes helped explore a set of enormous gates that had opened on the edge of the Solar System. These gave humanity access to a myriad of alien planets, light-years from Earth. At the start of the story a craft full of colonists has burst through the gates and set up a new home on one of these planets; a planet claimed by a mega-corporation which is keen on its easily accessible mineral wealth.

There follows a complex stand-off as each group stakes its own claim and James Holden and his crew are sent in by the UN as mediators, until the planet itself intervenes to get rid of its unwanted inhabitants.

No one would pretend that the Expanse series is great literature. Yet it is compelling reading - well paced and entertaining, and like a soap-opera you know what you are going to get. It's with a only a tinge of guilt that I look forward to the next volume.