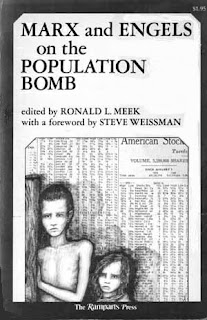 I've written elsewhere about the Reverend Malthus' views on population. His basic theory - that population will always, inevitably outstrip available food supplies has become a mantra for anyone who wants to argue that there are too many people on the planet. In the context of the problem of climate change, this has become an argument that the world doesn't have enough resources to support the population, and if we are to save the planet - the number of humans will have to decrease.

Some of Malthus' earliest and most ferocious critics were Marx and Engels. This book collects together most of their writings on Malthus and related issues with a couple of useful framing essays.

The basic premise of the editor, and indeed the basic argument of Marxists against Malthus and his followers is that "without destroying capitalism, neither a Green Revolution nor population control will put food into the mouths of those who cannot afford it".

In response to the question "why are people hungry?" Marx and Engels preferred to ask "Why is not enough produced?" The answer they argued is to do with the priorities of production under capitalism - production of food or any other commodity is for profit, not for need. If people couldn't afford food, then they wouldn't eat. In Engels' words "the pressure of population is not upon the means of subsistence but upon the means of employment."

This is why you have starvation in the midst of plenty. Both Marx and Engels took great pains to argue the problems with Malthusian theory. Their starting point though, was utter contempt and hatred for the man. Both repeated argued that he was a plagiarist, but their real anger was because he was a "shameless sycophant of the ruling classes".

Malthus wrote his first editions of his work on population in the aftermath of the Great French Revolution. This seismic event had raised in the heads of millions of people, the idea of a more equal, just and free society. Everywhere the ruling classes trembled. Malthus wrote his argument as an explicit attack on those who believed that such a free society was possible. It is a polemic that argues that humans, particularly the "lower orders" are too stupid, to inclined to have more and more children, to lazy to allow a better society to live. But he also believed class division was inevitable and that without it, society would collapse.

Marx and Engels understood this well. They also believed that despite his plagiarism, Malthus had some useful insights into the way the world of economics worked. But for them this was Malthus justifying his position, as, they argued, a supporter of the old landed aristocracy against the new industrial bourgeois. Malthus' work had immediate consequences - the first of these was the hated workhouse system, a system that offered relief only in the must grudging way. As Marx put it;

"in the workhouses charity is ingeniously combined with the revenge of the bourgeoisie upon the poor who appeal to its charity."

For people like Malthus the poor exist because of the inherent laziness of a layer of the lower orders. For Marx and Engels, the poor existed because capitalism found it both useful to have a reserve army of labour ready for economic boom times and because the capitalists profits meant driving down wages and laying workers off. The state had a duty to protect the poor, but Malthusians argued that by doing this you were simply increasing the problem. Overpopulation was inevitable so why bother helping those who couldn't survive anyway?

Throughout their attacks on Malthus and his followers Marx and Engels return to the point that without the revolutionary transformation of society; without the creation of a new world were production is planned in the interest of need, not profit there would continue to be people who starve in the midst of plenty. There would also be those, like Malthus, who try to find pseudo-scientific arguments for why this is inevitable, presumably to make the bitter pill of their own culpability easier to swallow.

Marx and Engels on the Population Bomb, edited by Ronald L. Meek with a foreword by Steve Weissman, is long out of print. Selections from it can be found online here. The introduction is useful, though any author who uncritically quotes Stalin on production should be read critically themselves. The collection contains a variety of works from Marx and Engels, including some of their letters, Engels' Condition of the Working Class and Anti-During, Marx's Theories of Surplus Value and Capital.
Posted by Resolute Reader at 9:16 am