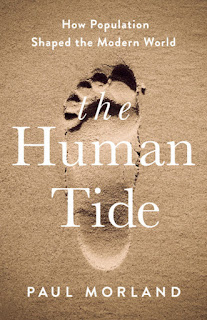 Contemporary books on population are often, at best, frustrating. At worst they are apologies for anti-human policies that see people as the origin of all our problems - whether poverty, food or environmental. So I was pleasantly surprised that early on in this new book by Paul Morland he puts a case that population growth is not a bad thing:


But for all the caveats, proper acknowledgement should be made of the great achievement that is the vast multiplying of human numbers and the provision of billions of people with a standard of living and health care and education which the wealthiest of earlier ages would have envied.

By this, Morland distinguishes himself from a myriad of other authors who contend that population growth is in itself bad. This is not to say that he dismisses population growth or ignores some of its consequences. Much of the book is a study of how population change has taken place across the world at different times. I won't repeat Morland's arguments here, but his conclusion is roughly that societies go through a fairly predictable pattern of slow, gradual growth interrupted occasionally by events like the Black Death, followed by a rapid acceleration that is associated with the transition to an industrial economy, followed by a slow decline in fertility and mortality. The latter, he says take place on time-scales "which once took generations [but] now take place in decades."

This is very interesting, and for those who are arguing against the tide, that population growth is not the origin of poverty, hunger or environmental disaster, the book contains many, very useful, facts and figures about the likely demographic future. However Morland comes unstuck with his argument that demographic change is at the heart of the vast majority of historical change. His book is, as he explains, "about the role of population in history". He says that "demography is a factor which itself is driven by other factors, numerous and complex, some material, some ideological and some accidental." But despite saying this, often he falls back on an argument that population change is the most important factor. For instance Morland writes:


As soon as a country of many hundreds of millions starts to get going [economically], even moving from abject to moderate poverty for its average citizen, the weight of numbers starts to count. The United States... is not the largest economy in the world because its people are very much richer than people in the individual European countries or Japan, but because there are so many more of them.


Germany's burgeoning population at home allowed it eventually to field great armies on the battlefields of the Eastern and Western Fronts in both world wars. Britain's mass emigration meant it could raise a smaller army from its home population but could call on the assistance of a worldwide network in wartime, for food, equipment and men.

Both of these examples do not stand up to real historical analysis. The population of the US matters, of course, but US power in the 20th and 21st century arose from a host of historical factors that are far more important that sheer numbers of people. The decline of European colonialism, the rise of a more modern industry over that of Europe, the exhaustion of Britain (in particular). Britain could call on resources from around the world not because of emigration, but because of colonialism and Imperialism. One million Indian troops fought for Britain in World War One - not because of emigration, but because of colonial history, a factor that helped fuel the Independence movement.

Morland is repeatedly guilty of putting a mechanical argument about population ahead of a deeper understanding of economic development, political change and ignoring colonialism and imperialism (an issue which leads to a particularly crude analysis of the origins of the Israel/Palestinian conflict0. At times this is surprisingly crude. To argue, for instance, that war in Yemen (indeed war or violence in general) is due to young populations is to be guilty of crude causation. Or to write that "The fact [Woodrow] Wilson was in a position to impose his ideas [at Versailles] reflected the triumphant growth of America's population". Demographics was not the reason - economic power was, and that is not the same as having lots of workers.

It is important to stress that Morland is no conservative. His argument is that population growth is not the threat that so many think it is. This is, he argues, because larger populations can be supported by planetary resources and will provide more people to do work to improve the planet and the economy. Unfortunately there's not enough here to back that up and I suspect many readers will be unconvinced. He also points out that we are not living through a population explosion, but a trajectory which will see the levelling off of population growth in the not to distant future. As countries become more wealthy, more urban and, crucially, make sure women are provided with real choices about their own fertility, population will plateau and likely decline. In this, fertility choices are closely linked with economic and political realities.


Fertility rates...are especially low in countries where women are encouraged to get an education and a career but where birth outside marriage is frowned upon. They are much better in countries where attitudes to women in the workplace are more positive and provision is made to allow both female and make workers to combine careers with parenting.

Later, he concludes that "the human tide is best managed by ordinary human beings themselves". Having looked at failed examples of state fertility management in places as varied as the former USSR, China and the US, it's hard not to agree.

Unfortunately I find it hard to recommend Paul Morland's book. The useful nuggets of information are drowned out by crude arguments which don't stand up to scrutiny. A more useful book on population in my opinion is Ian Angus and Simon Butler's Too Many People? which locates demographic change squarely in the context of the economic and political system.

Malthus - An Essay on the Principle of Population
Pearce - PeopleQuake, Mass Migration, Ageing Nations and the Coming Population Crash
Thornett - Facing the Apocalypse: Arguments for Ecosocialism
Meek (ed) - Marx and Engels on the Population Bomb
Posted by Resolute Reader at 9:39 pm