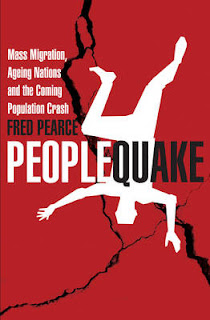 Fred Pearce's latest book is a polemic that never quite reads as a polemic. He is tackling two important myths. The first is that the world is over-crowded, the second is that it cannot sustain the existing, or predicted population.

Pearce points out, that in large parts of the globe, in particular the developed nations, population is crashing as fertility rates fall. Countries like Italy and Germany face loosing over 80% of their "native" populations. Russia is loosing half a million from it's population figures every year. Iran has a below replacement fertility rate of 1.7 children per woman. The USA's population is growing, but thanks to migrants. This is of course the irony. Despite the anti-immigrant racism and rhetoric we see so much these days, many countries will be crying out for young workers in the coming decades to help keep the wheels of industry turning.

Secondly, though Pearce takes up the arguments of people like Robert Malthus and his followers. The world can, he argues sustain a much larger population. Partly it's because more people means more hands to work and partly this is because technological innovation can provide more food and improve how we use resources. Most obviously we've seen this with the "Green Revolution" of the 1970s. Pearce quotes on researcher;

"If during the next 50 years or so, the world's farmers reach the average yield of today's US corn grower, ten billion could be fed with only half of today's cropland, while they eat today's US calories".

But it's also because it's not the areas of high or rapidly expanding populations that are the most destructive to the planet. What really matters is the consumption of a society;

"the richest billion people on the planet, their average consumption of resources and production of waste today is 32 times that of the average for the remaining almost six billion"

Pearce continues that "the richest 7% (about half a billion people) are responsible for 50% of emissions."

The point is not to argue that our developed world needs to become like the undeveloped, but to show that an increase in population in say India or China, will not have the impact of an increase in population in say, the US, Britain or France. Strategies to deal with climate change must include tackling how our societies are organised in the wealthiest nations, rather than putting the blame on the developed world.

There is much else of interest in this book. The way that Overpopulation arguments have always meshed with racist ideas or Eugenics for instance. Something that still continues today. The ideological arguments through the cold-war that led the US to develop better crops, to help stave off revolution in the third world.

Pearce is perhaps overly optimistic, there is still a battle on to save the planet. But the falling population we are likely to see within a generation may help this process. Ultimately though, the question of saving the planet must move on blaming the poorest in the world and start to challenge the priorities of a system which is so inherently destructive.

Buy this Book at Bookmarks.

Pearce - The Last Generation
Pearce - When the Rivers Run Dry
Patel - Stuffed and Starved
Posted by Resolute Reader at 4:48 pm