Brian Clegg - Gravity: Why What Goes Up, Must Come Down 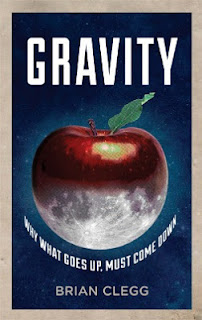 Brian Clegg is a fairly prolific writer of popular science books and he has a knack for putting across quite complex concepts in a fairly straight forward way. His decision to write a book on gravity should be welcomed because the topic is one that seems simple but in reality has some enormous complications.

Clegg begins his survey of our understanding of gravity with a examination of the way that we've understood it  historically. The common sense view of gravity is that things fall down. We know today that the rules of gravity are more complex than this - in essence the basic idea is that (following Isaac Newton) objects that have mass attract every other object with mass with a force that is inversely proportionally to the square of the distance between them, multiplied by their masses. (Things with mass attract other things, but less powerfully the further they are away).

For those of us who have had a modern science education or watched film of astronauts this may seem logical. But as Clegg points out, this understanding is very new and if we go back to the earliest ideas of gravity we have to look at some quite "alien" ideas.

The Greek thinker Aristotle had very different ideas about why things fall when you drop them. He believed that things are naturally at rest. In the Aristotilian world view, if you push something it moves until the push is removed. "The place where it stops moving depends on its elementary nature - so Earth, for example, stops moving when it as close as it can get to the centre of the universe". For the Greeks, "earthy objects had a natural heaviness (gravity) that made them want to be at the centre of the universe, while airy objects had natural lightness... that made them move away from the centre".

Such concepts seem odd because the Greeks were limited like by their different view of the universe. For them the Earth was the centre of the universe, the stars and planets fixed in place and a mere four fundamental elements. They were also limited by the stubborn refusal of people like Aristotle to find experimental verification for their theories. Their ideas seemed logical at the time, but wouldn't have often stood the most basic of tests. Famously it took the arrival of Galileo to show that objects of different weights did not accelerate at different rates, a result could have been proved with the technology available to Aristotle and his contemporaries.

The bulk of the book is devoted to more modern ideas about gravity and much of this is based on the development of the ideas of Albert Einstein. Clegg gives us a potted history of Einstein's theories. He covers the special theory of relativity in a few brief pages, concentrating on General Relativity as it is here that gravity plays its most important role. Einstein's innovation in the general theory was, in its most simplest form, to show that space and time are shaped by gravity. There are all sorts of consequences of this and Clegg does a good job of summarising many of the key points (the way that light from distant objects can be "bent" by the presence of mass for instance). He also gives a useful history of attempts to prove the theory, such as expeditions to see the way that the position of stars was distorted by the presence of our sun, something only viewable during solar eclipses.

After looking at General Relativity, Clegg moves further into the exotic. Firstly he discusses attempts to link general relativity together with the science of Quantum Mechanics - the ideas that govern what takes place on very very small scales. Famously this has yet to be achieved, but Clegg gives us some tantalising glimpses of the possibilities. Most intriguingly, Clegg discusses the  work of a Czech physicist, Peter Horava, who has managed to mathematically link general relativity with quantum theory, but only in the special case of the mathematics that might have taken place in the very early stages of the universe.

Finally, after briefly being diverted by discussions on time-travel, Clegg examines the way that gravity works. We are used to thinking of the influence being instantaneous. But gravity only works at the speed of light. Exactly HOW this happens is a matter for enormous debate. Again here mathematics is king. Some of the enormously complex equations suggest that gravity might be like other forces such as electromagnetism, whose influence is governed by the movement of packets of energy called photons. Experimental attempts to spot these packets of gravity (gravitons) have so far been unsuccessful, in part because of the great difficulties in spotting them amongst all the noise caused by masses around us.

Much of this discussion is fascinating, and Clegg's skill as a writer is to get across such ideas. I suspect that most readers will understand 90% of the book and will take the rest on trust. Some of the concepts - such as gravity itself causing further gravity - are hard to get ones head around, but often Clegg does them justice.

However there are some problems with the book. The first of these is editing. In a couple of places the sentences read very badly, and there is at least one nonsensical line ("One pound weight of coffee on the Moon would be 6 times as much coffee 1 pound weight of coffee on the Earth"). At least one of the URLs in the references, supposedly linking to a video demonstrating the properties of gyroscopes doesn't work (chapter 11, reference 3 if the publishers are reading). These are annoying problems that should have been picked up before the book was published.

More problematic is Clegg's way of drowning the reader in ideas and concepts. He mentions the idea of quantum tunnelling on page four for starters - throwing the reader in at the deep end. In the space of a few pages (84-85) Clegg discusses, tidal forces in planets and moons, red giants, extraterrestrial life, followed a few pages on by the life and death of stars. All these things are linked, but it felt like a roller coaster of a read.

These criticisms aside it is a useful book. In the final chapter Clegg quotes the American physicist Richard Feynman saying "the most impressive fact is that gravity is simple". In a way that is true but I fear that Clegg makes too much of this. Gravity might be simple, but understanding it is an incredibly difficult task. This is why many of the scientists discussed in the book devoted their entire lives to trying to solve aspects of the science. Cleggs book is a good attempt at making some difficult science easier.

Clegg - Infinity: The Quest to think the Unthinkable
Johnson - The Ten Most Beautiful Experiments
Cathcart - The Fly in the Cathedral
Posted by Resolute Reader at 7:53 pm