Brian Greene - The Elegant Universe: Superstrings, Hidden Dimensions, and the Quest for the Ultimate Theory 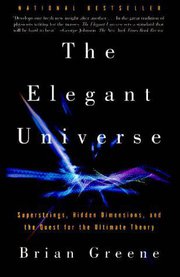 In this challenging book "string theorist" Brian Greene has attempted to being together the most recent understanding of this complex branch of theoretical physics together with the context that it was developed in. He starts, as any explanation of modern physics must, with the inadequacies of our own experience of the universe. We can, to borrow Greene's analogy, understand why a ball might bounce, but we cannot use the same set of ideas to explain what happens when a star enters a black hole, or what happens to particles travelling close to the speed of light.

So Greene begins with a detailed explanation of the big picture. Starting with Newtonian physics, he quickly moves through the developments that led Einstein to his Special theory of Relativity and thence onto the General Theory. Having efficiently and clearly covered this ground, Greene turns to the other end of the scale and teaches the reader Quantum Mechanics in a few chapters. These sections of the book are some of the best, most accessible and well written. Greene is given to the over use of metaphor, something that is always a problem when discussing theoretical physics, but sometimes the metaphor's are culturally limited and difficult to understand ("It's as if you were playing The Price is Right and Bob Parker gives you ten billion billion dollars and challenges you to purchase products that will cost... all but 189 of the dollars").

Having reached general relativity and quantum mechanics physicists were then challenged with finding the link between them. Or rather a theory that could include both. Both work extremely well on the macro and micro levels, but though general relativity should theoretically work on a quantum level, the equations break down. String Theory is an attempt to link the two together and get us closer to a Grand Theory of Everything.

Now String Theory is a way of looking at the building blocks of the universe as being small loops of vibrating string. The different vibrations represent different energies and hence, because mass and energy are linked, different types of particles. All well and good. Explanations beyond this become complex and difficult and you really need to find a good book to explain it further.

The question is, has Brian Greene written that book? I have to say that I don't think so. Its been immensely popular, and even if it has slightly dated in the decade or so since first publication, it pretty much covers the basic areas covered by modern string theory. But does it explain it well?

Firstly I struggled to work out who the book was aimed at. Certainly not string theorists themselves (many of whom are name-checked here). It is designed as an introduction to the topic. What about scientifically literate readers such as myself? Well I have a degree in Maths and Physics and some of the sections in here were baffling to me, despite repeated readings. In places I felt I needed more (perhaps more equations and numbers would have helped). The biggest problem was I felt, that without a fairly detailed grasp of the equations themselves, no amount of metaphor can explain the concept of dimensions folded in on themselves, or other equally complex ideas. Certainly I felt that without some grounding in science, many readers would have great trouble understanding what was being written about.

There are of course some fascinating parts to the book and it is worth reading just to get a general idea of what is happening. Its clear that string theorists believe that they are, or at least were, on the cusp of further great insights into the universe. Greene avoids saying to definitely that he thinks string theory will lead directly to the Grand Theory, though he clearly thinks its our best chance. Towards the end of the book, he concludes that "[c]enturies from now, superstring theory... may have developed so far beyond our current formulation that it might be unrecognizable even to today's leading researchers". This is probably fair. Even if string theory is found to be a dead end in some respects, it will have at least helped break the reliance on a particular way of looking at the universe.

My final gripe though is that Greene leaves much of the work shrouded in fog. Time and again we are told of a scientist or a researcher developing some insight, making a breakthrough or clearing something up. Yet we're not told how this work progresses. I presume its through some form of computer modelling, yet this is rarely mentioned. It can't all be sitting there with a blank page staring at equations. Take these lines, for instance:

"What about the other forces of the standard model? How do their intrinsic strengths vary with distance? In 1973, Gross and Frank Wilczek at Peinceton, and, independently, David Politzer at Harvard, studied this question and found a surprising answer".

Yet nothing is explained about their study. How did they do it? Later, Greene continues, the scientists "argued that this difference is actually due to the different effect that the haze of microscopic quantum activity has on each force. Their calculations showed that if this haze is penetrated by examining the forces..."

Yet this haze is a metaphor. No instruments exist that can peer that closely into quantum relations. What is the mechanism for this penetration? How exactly did the scientists proceed in their examination? The reader remains in the dark.

Sadly I feel that this book was a missed opportunity. For the layman, most of it will be incomprehensible. Some will finish it and be tempted to dismiss the whole subject as a dark art. Even for a physics student used to the rarefied ways that scientists can talk, some of this will be difficult. Sadly the book falls between two audiences and will, I suspect only be enjoyed by a small number of readers which is a great tragedy.


Clegg - Infinity
Cathcart - The Fly in the Cathedral
Posted by Resolute Reader at 8:28 pm

I'm reading Greene's "The Fabric of the Cosmos" at the moment. According to Amazon reviews, it is intended as an easier, more up-to-date version of this book. I remember reading some of "The Elegant Universe", but as you say it is difficult to wrap one's head around this subject matter. I've been supplementing my trek through it by reading sections in other books (like Peter Atkins' "Galileo's Finger").

A friend of mine (studying physics and interning at Fermilab) panned the book when she mentioned to me, in part because she's a critic of string theory. According to her, it can't be used to make any predictions. With your background, and having read this book, does that seem valid?

I suppose the question is really, what sort of predictions does your friend expect String Theory to make.

As Greene explains, String Theory does a good job of linking Relativity with QM. It also can, in a limited sense, be experimentally verified (or at least some aspects). The problem is that we can't prove most of it (we can't for instance, see the strings) and it remains a mathematical construct.

I have some sympathies with critics of string theory (again, based on my limited knowledge). The truth is, that I suspect the work that has been done may well form a part of a much larger and more extensive whole in the future. This is the point of the quote from Greene I used.