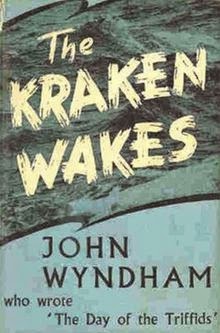 John Wyndham is perhaps best known for his book The Day of the Triffids. But equally popular when first published in 1953 was another disaster story, The Kraken Wakes. I would venture to suggest that it is a far superior novel, and indeed, when re-reading in the context of climate change, the story takes on new meanings and resonances in the 21st century.

Told through the eyes of two journalists with the English Broadcasting Corporation, ("No, the EBC, not the BBC") Mike and Phyllis Watson, this is the story of a growing crisis that follows the arrival of aliens which descend to the depths of the oceans. Clearly preferring the high-pressure environment of the deepest parts of the sea, we can speculate that the aliens originate from Jupiter or Saturn. What is less clear is why they choose to attack the humans living far above them. Nonetheless, the story centers on the growing problems as sea-going transport becomes difficult, then dangerous and finally impossible, and more worryingly, as sea-levels rapidly rise.

Because the narrators were chanced to witness the initial arrival of the aliens, they rapidly become experts, and along with outspoken and doom-laden Professor Bocker, they manage to either have knowledge or experience of much of the major incidents as civilisation slowly collapses.

But what is far more important than the actual story is the background to events. This is a firmly 1950s world, where the Soviet Union vies with the West in an often irrational anti-capitalist tug of war. American's dropping nukes on aliens at the bottom of the ocean is of course interpreted as imperialist aggression, and the USSR's own shipping losses are carefully hidden from world-view. I don't know much about John Wyndham, I suspect his politics were liberal, but he places his tongue firmly in cheek when discussing the insanity of cold war politics faced with an existential crisis, not least because there is an equally dangerous arms race taking place with unknown forces at the bottom of the sea.

More interesting are those at the bottom of society, who react in various ways to the growing crisis. As the water's rise, Londoners travel to the Embankment to watch the sandbags being laid, then gawp in horror as the water breaks through. But it seems all unreal. The EBC and BBC compete for the best material, remaining in London as water levels rise, and occupying the top floor of rented skyscrapers, from which the journalists watch each other through binoculars. A hint of a more commercial media future is mentioned as Mike Watson points out that even though civilisation barely exists anymore, the EBC gets low rent on its building in return for the occasional mention of the owner, when reporting from abandoned London.

As ships become to dangerous to use, unemployed dockers and sailors protest, strike and riot. The airline workers, now in boom time, come out in solidarity and the collapse of civilisation is accompanied by open revolt. But others react differently. The workers building the EBC's "fortress" shrug their shoulders and the improbability of the end of the world, and enjoy the over-time pay. Several characters complain that the government wants them to fight off attacks from the sea, but won't distribute arms. One publican pointing out that it was exactly the same with the Home Guard in the last war.

Eventually those fleeing the coastlines are shot at and turned away from communities that have erected fences and barbed wire to protect their food and property. The analogy with climate refugees fleeing New Orleans or Bangladesh is unintentional but it leaves the reader uncomfortable. 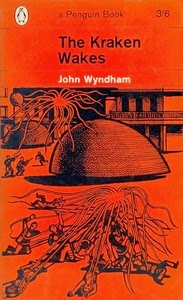 The struggle of a few scientists and journalists to alert the world to an apparent threat, one that is initially dismissed with laughter, then scepticism, and finally concern over the cost of action, also seems all to real. Its as if John Wyndham had a time machine and could look forward a future when politicians ignore scientific advice, or prioritise the interests of big business. The British Marxist, Chris Harman, once argued that climate change would exacerbate existing fissures in capitalism. Wyndham's novel shows very much what that might mean in reality as a sea-levels rise far rapidly than they are at the moment.

Wyndham would have had no idea about the threat from a warming world. Indeed in the 1950s, a far bigger fear was of a cooling world leading to an new ice-age, which is probably why icebergs loom large in the story. I found the ending over-optimistic, not least because it placed a faith in science and technology largely missing from the rest of the novel.

But because the alien threat leads to rapidly rising water levels, in a world dominated by imperialist conflict and class tension, the 21st century reader finds themselves with a book that aptly describes their own world.