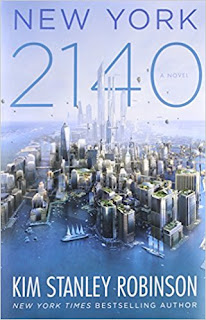 What will life be like for people when global warming has melted the ice caps and climate change has transformed the world's environment? The vast majority of scientists conclude that the temperature rises we can expect by the end of the current century will mean a colossal human catastrophe, unless there we radically reduce the amount of carbon emissions. These changes will mean disaster for millions of people with water shortages, heat waves, flooding, extreme weather and famine following. Millions of people will suffer and there will be a corresponding catastrophe for the Earth's flora and fauna.

Runway climate change - the result of global warming causing processes that feedback and lead to more global warming - could, in some scenarios lead to levels of warming that make Earth uninhabitable for humans. But before that takes place, there will be millions of people living, and struggling, on a hotter world.

This then is the premise for Kim Stanley Robinson's latest novel. He focuses on the city of New York after two major "pulse" events have led to significant sea level rises that have destroyed much of the world's coast lines and turned cities like New York into collections of island skyscrapers. People have learnt to adapt - to sea the basement floors and build farms on the top of the towers. Many of the towers in Robinson's New York of 2140 are run by a sort of collective democratic leadership.

Capitalism still exists, and Robinson brilliantly shows how the system adapts to these changes. New financial markets are opened up with wealthy speculators betting on the way that water levels change the value of the markets. Robinson uses much of this to discuss the way that capitalism leads to economic and environmental crisis, and how governments are prepared to let ordinary people suffer in order to bail out the banks and the system.

The story follows a group of people living the Met tower - a couple of computer experts who have tried to hack the financial system to bring capitalism down, a policewoman who is trying to find out who kidnapped them, a financial speculator who is obsessed with new ways of making himself rich in the era of high water levels and various other characters including a couple of kids who find treasure worth billions. One rather lovable chatterer is Amelia who pilots a blimp and has an enormous "cloud following" of viewers who watch her nature films. These characters all gradually come to the conclusion that the system is broken and is heading for a major economic crash, and the time is right to change things.

Reading this as an environmental activist and a Marxist I had three problems with the book. At this point I should emphasis that Kim Stanley Robinson is one of my favourite authors, but there are major problems with this novel. Firstly the world he depicts, post climate disaster, is simply to good. This is basically early 21st century capitalism with higher sea levels and no ice-caps. You don't get any sense of how the warming that has lead to the pulse events has impacted the rest of the world. Even the stories of the Netherlands being destroyed and replaced by a floating city state seem to imply that everything is OK really. The refugees who make it to the Met come across as slightly lost migrants, rather than people who have seen their entire world collapse. In fact we hear next to nothing about what is taking place in the rest of the world. Surely there are wars, famines and disasters?

In other words, Robinson's future is too nice. There's no real sense that global warming has led to phase shift of the planet's ecological system. Things are just a little bit worse than they were. It's not a scientifically accurate picture of what could happen and it downplays the crisis we are in the midst of. In addition, Robinson's belief that technology is the solution seems naive too. New York 2140 is extremely high-tech, the environmental disaster having apparently spurred innovation to solve the problems of the world.

Secondly the economics just don't work. While reading this I was suddenly struck by the idea that this was actually not a revolutionary work (despite the mass involvement of ordinary people in a capital "strike" that puts the economy into crisis). It's a book about how Keynesian economics must replace neo-liberalism if we're to have social and ecological justice. The big, radical idea at the heart of the book is to nationalise the banks. It's inadequate in the context of Robinson's world and its not enough if we want to really challenge real-world capitalism.

The final problem I had is that the story doesn't go anywhere. There are some brilliant bits - a very well described riot in the aftermath of a huge storm, and a comic chapter about polar bears and blimps - but the story is weak and ends by getting the reader to believe that Washington really is an OK place if only you get the right people elected.

To be a little blunter, I think this is the book that Robinson wrote after reading Naomi Klein's This Changes Everything and seeing Trump elected instead of Clinton. Klein's book is a great read in terms of understanding the scale of the environmental crisis and its roots in capitalism. But she fails to put across a revolutionary challenge and falls back on a Keynesian solution - where neo-liberalism ends and the state is more directly involved. These are laudable aims, but as a solution to exploitation, oppression and environmental crisis it is inadequate. In Robinson's homage to New York, even a highly flooded one, it underpins a very weak novel indeed. Sadly you can imagine someone reading this and concluding that climate change isn't actually that bad.