Lucie Green - 15 Million Degrees: A Journey to the Centre of the Sun 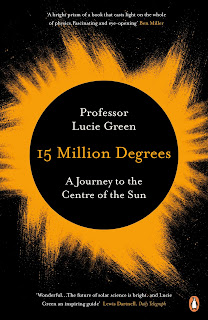 Despite being interested in astronomy for decades I have, like many other amateur astronomers, neglected my studies of the Sun. In part, as the author of this excellent guide to our nearest star makes clear, this is because looking at the Sun is both dangerous and difficult without specialist equipment. But I think a bigger issue is that I don't think I really understood what a wonderfully complex and fascinating body the Sun is.

Lucie Green is a longstanding solar scientist. She is also a well known broadcaster and an excellent communicator of complex scientific ideas. This latter point is important because to understand the Sun requires some getting to grips with some fundamental physics and the concepts are not always easy to understand. So the opening chapter begins with an account of the development of our understanding of electromagnetism - we need to know this because it helps us understand the information we are receiving from the Sun via the light we receive (both visible and other parts of the electromagnetic spectrum). Knowing this helps us understand what's going on inside the Sun. Green then takes us through the history of studies of the Sun and shows how we have built on several centuries of observations and science.

This is science on a massive scale. The Sun itself is big - even just on the scale of what we can see. But the Sun's outer atmosphere (invisible to human senses) extends beyond the Earth itself, and the influence of the Sun, in terms of the solar wind, extends a very long way indeed beyond the outermost planet. I recently enjoyed Jim Bell's account of the Voyager missions The Interstellar Age, and Green explains just why the ongoing science obtained from those two ageing craft is so important. But the Sun is also huge in terms of the energy it produces and the length of time it has been doing this for. Even with my own knowledge of nuclear physics and astronomy I was still fascinated by Green's account of the Sun's formation and the fusion in its core. We are, Green explains, fortunate that our modern scientific era, and especially the space age have coincided with a particularly fascinating era of the Sun's cycles. But we have been, since around 1985 observing the Sun leaving it's "Grand Maximum State" and the Sun is likely to become relatively dimmer in coming decades. Here Green explains precisely why, contrary to the heartfelt beliefs of various commentators on climate change science, this will have no serious impact on global temperatures. One thing that becomes very clear is just how many of the processes that we observe are the result of complex magnetic interactions throughout the different layers of the Sun - I was quite amazed to find out that we have managed to observe the magnetism of other stars, though disappointed not to be told more about how! Despite Green's ability to communicate complex ideas I did struggle to follow some of the descriptions of what was taking place - my advice to other readers is not to worry too much if you can't understand all the detail - the big picture is very much the key issue.

One of the great things about the book is the way that Green links the Sun to our own lives and society. She shows how the Sun is responsible for life (and civilisation) but also the threats it can have to modern technology and society. The end of the book discusses the uniqueness of our Sun, when compared to the billions of other stars. Lucie Green concludes that while the Sun is not that unique in astronomical terms, it is in the sense that it is the one that we can study and that gave rise to life here. So I recommend 15 Million Degrees very much, not just because it's fascinating science, but also because it's subject, the Sun, is part and parcel of our life on this planet.

Winterburn - The Quiet Revolution of Caroline Herschel: The Lost Heroine of Astronomy
Bell - The Interstellar Age
Clegg - Gravity: Why What Goes Up, Must Come Down
Holmes - The Age of Wonder
Posted by Resolute Reader at 9:46 pm