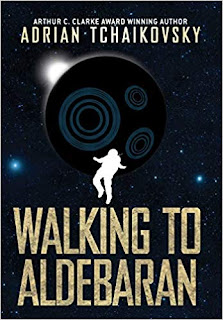 You know that thing when, as a child, you wanted something so very badly that it hurt? But when you got it, it wasn't what you wanted to have at all? Well Gary Rendell, the British astronaut at the heart of Adrian Tchaikovsky's short novel Walking to Aldebaran really really wanted to go to space. He was lucky enough to have his dream come true, when an alien artefact is found far out in the solar system. When a robot probe investigates it is found to defy several laws of physics, and so a multi-nation human mission is sent to explore it.

The artefact, nicknamed after the frog it resembles, turns out to defy any attempt at understanding - physical laws, time and motion all seem to break down in unpredictable and inexplicable ways. Gary finds himself a loan survivor of the exploratory team, and stumbles around the frog in an attempt to get home. In doing so he discovers various weird, wacky, dangerous and insane aliens and puzzles. While Tchaikovsky is brilliant at describing the aliens that survive in the artefact, the book's real wonder for the reader is what the artefact is. Is it an abandoned alien portal? Is it a dead space-ship? Is it something else entirely while the species exploring it are doing little more than a hedgehog might using a tunnel under a motorway?

There are many reasons I loved this book. Firstly it's really tense and creepy. Secondly I love novels of first contact, space archaeology and science-fiction twists. But I also liked how Tchaikovsky made all the characters real and balanced the contemporary story of Gary in the artefact with the story of how he got there. I loved the idea that the multi-national crew all learnt Danish as part of a rebellion against their bosses back on Earth - the author's description of the crew and their interactions was done brilliantly.

While the basic concept of the book might not be that original, this is an excellent twist on the tale that packs more into it then many 500 plus page novels.