John Christopher - The Death of Grass 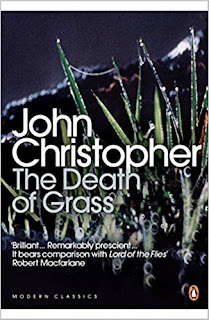 John Christopher's The Death of Grass is a remarkable ecological disaster novel first published in 1956. It's particularly surprising because it was published six years before Rachel Carson's classic Silent Spring kick started the modern environmental movement and at the heart of the book's disaster is a crisis caused by some of the same problems that Carson highlighted.

The book begins with the emergence of a strain of virus in Asia that decimates rice production there leading to the deaths of millions of people. It all seems very far away for the novel's main characters who, living in Southern England, are perfectly able to imagine that they will never be at risk. After all, Western Countries are producing enough food to send relief shipments to China, and surely the scientists will come up with something, they always do. As two of the protagonists discuss:


"Every government in the world is going to be comforting itself with the same reassuring thought. The scientists have never failed us yet. We shall never really believe they will until they do."
"When a thing has never failed before, it's not a bad presumption that it won't fail now."
"No," said Roger, "I suppose not." He lifted his nearly empty glass. "Look thy last on all things lovely every hour. A world without beer, Unimaginable. Drink up and let's have another."

Of course the virus defies attempts to defeat it, and jumps to wheat, rye and barley. Suddenly life is much more precarious and when the Roger and his friend John learn of the governments plans, they head north toward a secret valley farmed by John's brother David. Getting out of London proves a challenge, and requires John's group to begin their break from "civilisation". If "civilised society" hasn't broken down John comments, they'll all hang after their actions.

The failure of the scientists has been matched by the failure of the state. And civilisation descends rapidly into competing bodies of violent gangs intent on preserving themselves at the expense of everyone else. John's group have an aim - somewhere to get to - but everyone else is simply struggling to survive. This descent into animal like behaviour is actually the least convincing part of the book - I doubt doubt that some people would behave abominably as civilisation collapses and food becomes scarce. But it's also true that in disaster situations people organise collectively to try and help each other - something that just doesn't happen in The Death of Grass. The author underlines this by having the murderers and rapists often cover themselves in gold and jewels, despite their lack of value in the new world.

One great weakness in the book is the portrayal of women. By and large they are depicted as victims, following behind their menfolk who are doing the dirty and dangerous work. They are passive and unable to relate to the new situation. There is a particularly awful scene where one character murders his wife simply because of her infidelity, then takes a new, child bride.

Even within John's group there is discord and danger. The gun seller Pirrie who has come with them and brought guns and ammunition demonstrates the reality of the situation being prepared to kill in order to protect the groups, but exacting a tough price in return. Despite these limitations, the ending is very well done, though the detail need not concern us here.

In the introduction to this new edition, Robert Macfarlene contrasts the book to the "cosy catastrophe" of John Wyndham's work (The Day of the Triffids had been published a few years earlier). I felt that they shared more than he suggested, but The Death of Grass is much more brutal and lacks the comforting endings of Wyndham's books. Christopher also frames the disaster much better, locating it in an agricultural system that David points out, is more about producing goods decreed by the government, for the market; rather than worrying about the future. Faith in science proves, in Christopher's book, the Achilles' heel of modern society, whereas in Wyndham's work it is often society's salvation.

Ecological catastrophe aside, one other stand out of this novel is the extent to which the British state is prepared to go to ensure some people survive. They are stopped in this endeavour by a popular revolution in London, but the victors of this have little to offer except gramophone records on the BBC. Nero fiddles as London burns notes one of our heroes. Despite its bleak portrayal of human nature there is a lot in this book by John Christopher. I'm reminded how much I loved his Tripod trilogy as a youngster. His vision of ecological disaster has tragic parallels for today and I'm not surprised it has had a new renaissance after many years out of print.