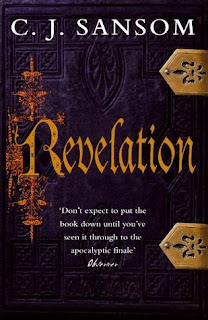 The adventures of CJ Sansom's Tudor hero Matthew Shardlake continue in Revelation. Unlike several previous books Revelation is not set around a particular event during Henry VIII's reign. Instead it's context is the confusion in the latter part of Henry's kingship as different forces vie for control - in particular different factions representing different aspects of religious ideas. Henry is increasingly moving towards a return to more tradition religious practice, at the same time others are holding out for a continuation of the Reformation. The religious changes over the last decades have left many ordinary people confused and a large minority are pulled by more extreme religious doctrine.

Shardlake moves through this confusing situation as he attempts to solve a gruesome series of murders. The killer appears to be using the apocalyptic biblical book Revelations as a basis for the murders - torturing victims in grim parodies of chapters taken from the book. One of the early murders is of a close friend of Shardlake which leads to him being pulled into a secretive effort to find the killer. He is up against time as the killer must be found before he concludes the murders as laid out in his reading of Revelations and before the King learns of the crimes that would likely lead to instability and panic in London, a city already close to religious violence.

Revelation deals little with wider issues - though in the background is Henry's courting of Catherine Parr. This means the book is much more like a modern detective story, albeit set in Tudor London, than the earlier books. Nonetheless it's a gripping read and, despite being fiction, like CJ Sansom's earlier books it gives the reader many insights into the Reformation and Henry's rule.