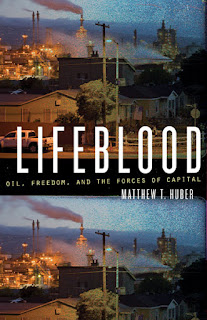 For those of us battling for radical action on climate change the role of the fossil fuel corporations within capitalism is a key issue. How they operate, why they behave like they do, and their role in maintaining fossil fuel capitalism is central to understanding why states have failed to enact the sort of radical action that is required. Matthew T. Huber's book is an attempt to understand, in the words of the publisher, "If our oil addiction is so bad for us, why don't we kick the habit?"

Huber begins by analysing the way that the oil corporations developed in the United States. It's a fascinating history of how the oil industry came to be closely associated with the US state and how it became central to the US economy. It's a story of dodgy dealings, strikes and repressive measures and state intervention. I learnt a great deal from this history and I would suggest that together with Andreas Malm's wonderful Fossil Capital, it is a very useful read for anyone trying to understand oil's centrality to capitalism. In this review I want to focus on Huber's central thesis. He argues, for instance, that while (say) the anti-war movement have traditionally seen oil as central to US Imperialism, radicals have missed its wider centrality to how capitalism (particularly in the US) functions:


Thus political resistance to the geopolitical games of imperial control over oil reserves must cast their critical sights toward not only the US military state but also the geographies of social reproduction that situate oil as a necessary element of 'life'. The cries of 'no blood for oil' assume oil is a trivial 'thing' but a more effective antipetroleum politics must struggle against the more banal forms through which oil-based life gets naturalised as common sense. (*)


The forces behind the New Deal attempted to rescue capitalism through the construction of a new way of life based around high wages, home ownership, and auto-centric suburban geographies predicated upon the provision of cheap and abundant oil.

This new way of life, the American Dream, was based not simply on oil fuelling the system, but also the cheap goods, abundant food and materials that oil provided. What Huber describes as "a particular suburban landscape: a geography of mass consumption". The New Deal and the Second World War allowed the construction of this new "geography" and the export of this around the world through the Marshall Plan. The US, Huber argues, came out of the War as a "perfected petro-capitalist social formation" with a huge fossil fuel infrastructure for "mass production and mass consumption of petroleum". He continues by showing how everything from housing to food became fossil fuel industries.

While US society became dependent on oil, oil also dominated society. There's a fascinating discussion of the "oil shock" that took place as Middle Eastern countries increased their prices. The close links between the perceived "freedom" that oil gave and the American way of life came home to roost for the US government here. In one incident, in 1979, protesters rioted in Levittown, Pennsylvania, against government plans to limit petrol consumption by reducing speed on the roads. The government and the oil industry itself had built up an image of freedom associated with cheap oil (It should be noted that there are some amazing images in this book from oil company advertisements that closely link petrol with cars and a perception of freedom in a very capitalist way). But this comes back to haunt the US when cheap petrol is no longer available, or when there is a threat to the use of oil. Despite the US having vastly cheaper petrol than any other developed country, the price of petrol has become a major political issue for successive Presidents. This, combined with the reality of capitalism and environmental disaster today, means major issues for the US population:


By the 2000s the patterns of life and living in the US demonstrated a wanton disregard for energy efficiency, but overall, life under neoliberalism is characterised not by excess but by eroding wages, mounting debt, longer work hours, and nonexistent job security. Only in this social context can clamouring for cheap gasoline be understood.

Thus, for Huber, any threat to cheap petrol/oil becomes an existential threat to the American way of life, that must be resisted. While politicians and oil executives argue that climate change is a hoax, Huber suggests that "far more disturbing are the more entrenched and everyday forms of living, thinking and feeling that make cheap energy a 'commonsense' necessity of survival." This Huber argues poses a problem for Marxists. The struggle for an "emancipatory future" was he argues based on a vision of the endless energy available from fossil fuels, but using these is a threat to the future of humanity. So, a new strategy must be engaged upon, a "political struggle to produce new spatialities of social life... a struggle to make visible once again the social and collective forces that make any 'life' possible."

I think that Huber is right here, but I am more optimistic that this can, and will happen, because activists are already offering visions of a sustainable world beyond petroleum. What is needed, and I think the harder question, is how to we get the social movements that can challenge both the power of fossil fuel capitalism and through their activity create the basis for those new forms of society. I think there is a slight danger in Huber's approach which might end up with blaming the victims of the system for inaction on climate change. History has shown that workers have frequently rebelled against a system, or aspects of that system, despite it not being in their immediate interest (the struggle by workers in the munitions industry against World War One is one example).

These aren't questions that are discussed by Matthew T. Huber's book, but they do follow on from his arguments. While the work is very focused on the United States, and should be read in conjunction with Anderas Malm's book, it is an important work and environmentalists and socialists will get a lot from reading it.

* I'm not sure that the UK war movement did see oil as a "trivial" thing, but that's a discussion for another day.