Franz Mehring - Karl Marx: The Story of his Life 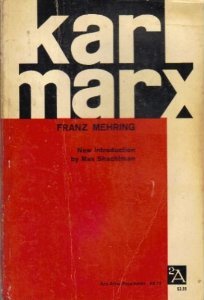 Unsurprisingly, Karl Marx is one of those figures in history who attracts biographers. Some of these are sympathetic, some are hagiographies, others are attempts to explore Marx's thought by understanding him as a man, and others are attempts to justify all sorts of contemporary ideas by appealing to the great man himself.

One of the most recent biographies was the 1999 book by Francis Wheen. It is certainly an accessible read, and in parts is a good introduction to Marx's life and times. Wheen is not a Marxist and he struggled here, and in a later book, to explain some of Marx's concepts. Wheen also was obsessed with Marx the man, portraying him as a grumpy old man, who spends lots of time in dark rooms, writing impenetrable texts, and forming lifelong feuds with former friends over minor points of doctrine.

Franz Mehring on the other hand, was a dedicated Marxist and one of the leading members of the German socialist movement in the run up to World War One. Along with his comrades, Rosa Luxemburg and Clara Zetkin, he fought to retain the genuine, revolutionary socialist tradition through the war years, when most of the socialist movement had capitulated to the needs of the German ruling class.

His biography is very important, because it is both a sympathetic account of Marx's life and an attempt to explain and reassert Marx's ideas. Unlike Wheen's book, Mehring does not dwell on Marx's private life. It is not that Mehring thinks it unimportant. Marx's lifelong friendship and collaboration with Frederich Engels clearly was extremely important to his ideas, and his ability to get them down on paper.

Similarly, Mehring doesn't dismiss Marx's marriage. Jenny Marx shared in many of Marx's struggles through his life and the descriptions of their joint suffering when one of their children dies are deeply moving. Jenny Marx pre-deceased Karl by barely a year, and while Mehring doesn't dwell on this part of their lives in detail, it's heart-rending to realise that Marx was too ill to attend her funeral. His despair at her death remains with him in that dark final year.

For Mehring, far more important than the private tribulations of the Marx family, is Karl Marx the activist, the revolutionary fighter. Its difficult to reconcile this Marx with those critics who complain that the great socialist did not know workers, because he lived on donations from his rich friend. Marx and his family certainly knew poverty, but more important, Marx knew hard work. While he never turned a lathe or laid bricks, his life was one of constant writing, meetings and argument. His editorship of several newspapers during times of revolutionary upheavel were certainly difficult jobs, but essential to his life. Marx was not a revolutionary who sat back and commentated on events, he took part and actively engaged and tried to shape movements; often at risk of prison, or worse punishments.

Anyone who has been around the socialist movement for any length of time will recognise the debates and discussions that Marx and Engels engage in. In particular, the rows, polemics and arguments during the rise and fall of the First International seem eerily familiar. But again, this is Marx in his element, part of the struggle, trying to change the world.

Mehring takes time to explain Marx's developing thought through the book. In fact, placing his ideas at the core of the work makes the book far superior to other biographies. Marx's ideas developed and changed over time, as he learnt from the world outside and the experience of struggle. The first chapters on Marx's earlier philosophy are a little hard going as the explore the works of figures like Hegel, but Mehring shows how Marx breaks from these as he watches the struggle of workers, living and fighting in the real world.

At each stage in Marx's life, Mehring examines his life and his work. So he takes us through the debates with other writers, the writing of the Communist Manifesto and Capital. The detail of the Paris Commune and Marx's brilliant polemic The Civil War in France is a fascinating chapter. Here we see Marx learning from the movement, but also actively engaging in solidarity. His home became a refuge for those fleeing the persecution of the Commune and his daughters married Communards.

Mehring describes some of the feuds Marx engaged in. Marx was no saint and like many socialists since, he was wrong occasionally and he was prone to believe false rumours about those he disagreed with or disliked. Mehring criticises his subject when describing the debates Marx had with Bakunin for instance, and has many good words to say about that class fighter, despite his critique of anarchism.

The Karl Marx in these pages is a fighter - a man angry at injustice, but thoughtful and inspiring. Someone prepared to fight his corner against all comers, but in no way monolithic in his thought. The author too comes through as deeply familiar with his source material and knowledgeable about obscure letters and newspapers. This is clearly the culmination of a lifetimes work. Like Marx, Mehring was a revolutionary who fought to change the world. If at times this book errs a little into the history of Germany and Prussia, it is in part because Mehring is engaged in debate and argument with his own comrades, as well as describing the background to Marx’s life.

For those who want to know Karl Marx better, as well as understanding his ideas, I can think of no finer biography.