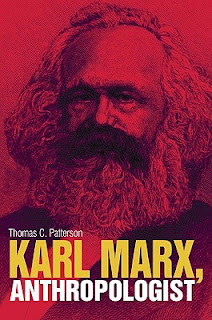 Thomas Patterson sets out to argue that central to Marx's understanding of the world, history and society was what we might now call anthropology. In one sense this should be no surprise - the study of society and how it changes does after all centre upon an understanding on what makes humans tick.

Marx was fascinated by human society in all its forms. Both Engels and he devoured contemporary books and research on archaeology, anthropology and related subjects. Patterson points out, that between 1879 and 1882, Marx filled 450 pages of notes "on topics as diverse as prehistoric Europe, the history of India, Dutch colonialism, family and gender in Roman society and American Indian societies". In part this is no doubt a result of the fascination that Marx had with history and people. But this was also a time when Marx was feverishly working on other topics, and Patterson argues that this reading reflected not just an interest, but as part of an attempt to understand non-capitalist and pre-capitalist societies. This was not a separate interest, but as part of a wider attempt to grapple with human history. In particular, Patterson argues, that Marx was trying to understand the potential for "alternative pathways of development for capitalist societies by the 1870s and for non-industrial and non-Western societies more than a decade earlier".

Marx and Engels also had a great fascination with other important subjects that were shaking up the intellectuals of Victorian England. One of these was evolution, and Marx devoured Darwin. "Absolutely splendid" was how Marx described The Origin of the Species in a letter to Engels, less than a month after its publication. Marx was critical, but he also saw how "Darwin rediscovers, among the beasts and the plants, the society of England with its division of labour, competition, opening up of new markets, "inventions" and Malthusian "struggle for existence."

This was not to argue that the social structures visible around them were mirrored in nature, but rather that Darwin and other scientists tended to reflect social ideas in their work. Their ability to locate the new scientific explanations and ideas in a wider understanding of society meant that Marx and Engels could be incredibly perceptive. Patterson demonstrates this by comparing Engels' little known pamphlet The Part Played By Labour in the Transition from Ape to Man to modern understandings of human evolution and the development of language and so on. Patterson concludes that Engels "got it right!" in his argument that the ability of proto-humans to use their hands as tools, helped to develop and encourage both this and their wider cogitative abilities. Of course, these ideas on the part of Engels were broad brushstrokes, and as with other areas of his scientific writing, Engels was often wrong. But what matters here is the approach to a subject and the attempts to link science with wider social questions.

Patterson's book is fascinating if a little hard going in places. Occasionally it feels to academic and the reader new to Marx's work (or indeed wider philosophical writings) might find some of it quite difficult. I was disappointed with the price-tag. Twenty pounds for a book of only 200 pages is a little steep, but clearly this is aimed at the academic market. This brings a second minor point - Patterson has an extensive and very useful bibliography. The one obvious missing Marxist from this is Chris Harman who had a great fascination with anthropology and wider human history. His writings I think would have fascinated Patterson and backed up some of his wider arguments. I cannot help but feel though that his absence reflects the fact that Harman was never an academic. In this context though, Harman's grounding in revolutionary practice would also have been useful to the author.

Chris Harman reviewed an earlier book by Patterson, Marx's Ghost - Conversations with Archaeologists. You can read that here.
This review of Karl Marx, Anthropologist by an actual anthropologist is worth reading.
Posted by Resolute Reader at 7:20 pm