James C. Scott - Against the Grain: A Deep History of the Earliest States 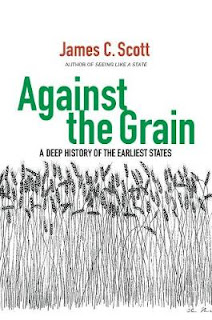 This fascinating new book takes a new look at an age old question of ancient history. Precisely when, where and why did early humans move from effectively nomadic existence to a sedentary one? Why did they make this transition that would lead to the first "states"? Traditionally historians argue the key issue is agriculture, and that farming led directly to sedentary life, and then to the rise of states and civilisation.

But this book by James C. Scott argues that while there is some truth to this, reality was often more complex. Of course the "neolithic revolution" was a fundamental transformation for human society. As Scott writes:


The domestication of plants as represented ultimately by fixed-field farming.. enmeshed us in an annual set of routines that organised our work life, our settlement patterns, our social structure... The harvest itself sets in train another sequence of routines: in the case of cereal crops, cutting,m bundling, threshing, gleaning, separation of straw, winnowing chaff, sieving, drying, sorting - most of which has historically been coded as women;'s work... Once Homo sapiens took that fateful step into agriculture, our species entered an austere monastery who taskmaster consists mostly of the demanding genetic clockwork of a few plants.

None of this is particularly new,  but the key question here is "why" did this happen? Scott answers this complex question with a number of points. Firstly he shows that domestication predates sedentary life. Animals and plants were used and managed even when humans were still living nomadic hunter-gatherer lives. He also points out that a transition to agriculture actually requires a lot more work from individuals.

Sometimes Scott is guilty of coming across as though he is the first author to highlight some of these things. But authors like MArshall Sahlins and Richard Lee showed in their studies of contempoary nomadic cultures that communities were well aware that agriculture requires more work per calorie. Its something I myself wrote about in Land and Labour. But Scott does well to show how blurred the distinction between nomadism, agriculture and sedetary life is.

Scott argues points to a number of societies that made the transition back to nomadic culture from sedentary society (the Dakota and Cheyenne nation of North America is a classic example though they did this when horses became available from Spanish colonists). He also argues, and I think rightly, that many early states were vulnerable because of their reliance on agriculture - and that the historical "collapse" of these societies is less the disasters that Jared Diamond has implied and more a transition back to earlier social organisation. In this context its good to see McAnany and Yoffee's book Questioning Collapse getting recognition.

Scott's book really excels when he talks about the nature of early states. I was particularly taken by his idea of "political crops" particularly wheat, barley, rice, millet and maize. These are easy to quantify, ripen at set times and the produce can be easily measured and transported (they're also relatively light for moving in bulk). Students of Karl Marx's Labour Theory of Value might be intrigued by the following example:


Units of grain served as standards of measurement and value for trade and tribute against which the value of other commodities was calculated - including labour. The daily food ration of the lowest class of labourers in Umma, Mesopotamia, was almost exactly two litres of barley measured out in the beveled bowls that are among the most ubiquitous archaeological finds.

I was less convinced of the role that Scott attributes to coercion in the early states. He writes that "when other forms of unfree labour [in addition to slavery] such as debt bondage, forced resettlement, and corvee labour, are taken into account, the importance of coerced labour for the maintenance and expansion of the grain-labour module at the core of the state is hard to deny."

Here I think Scott is slightly guilty of over-emphasising the coercive nature of the state. Writing about Mesopotamia again he says,


The dense concentration of grain and manpower on the only soils capable of sustaining them in such numbers... maximized the possibilities of appropriate, stratification, and inequality. The state form colonizes this nucleus as its productive based, scales it up, intensifies it, and occasionally it adds infrastructure... in the interest of fattening and protecting the goose that lays the golden eggs... one can think of these forms of intensification as elite niche-construction: modifying the landscape and ecology so as to enrich the productivity of its habitat.

Rightly Scott understands that the agricultural surplus is central to the functioning of the state. But to often he sees this as arising only out of coercion by the ruling classes. In other words the mass of the population don't really want to live in a "state" and have to be forced to do so. But precisely because residents would receive benefits from a state - protection from raiding, the organisation of food distribution, maintenance and building of irrigation systems etc - they might not necessarily all have to be coerced all the time. The ruling class doesn't only have a stick at its disposal, they also can dangle carrots.

That's not to say that everyone wanted to live in an unequal society. Agriculture gives human society a surplus which can lead to a class of society and the development of a state. But crucially it doesn't always. Flannery and Marcus' marvellous book The Creation of Inequality shows that early societies, both sedentary and nomadic resisted the development of inequality in numerous innovative ways. The rise of states was not inevitable, but when it did happen it eventually led to the erosion of the majority of other forms of social organisation.

All in all there is much of interest in this book, its easy to read, it made me rethink how and why the transition to agriculture takes place, and its full of fascinating details. Scott beings together a lot of material from many different sources. My slight disagreements about emphasis are not intended to prevent anyone from getting and enjoying this book.

Bellwood - The First Farmers
Martin - The Death of Big Men and the Rise of the Big Shots
Flannery and Marcus - The Creation of Inequality
McAnany and Yoffee - Questioning Collapse
Childe - What Happened in History?
Harper - The Fate of Rome
Posted by Resolute Reader at 9:04 pm

Interesting book, I agree, and he raises some very i compelling points. He never explains, or even asks, however, just why the coercion of the rapacious urban elite worked again and again and again. And who were they? Intrepid entrepreneurs of the shakedown racket? Barbarians who decided to milk the system from the inside?

The picture we are left with is of a generally passive mass of humanity that gets rolled over and over until the state finally, c.1600, runs everything. If it was inevitable, as he makes it seem, he should explain why? Or, did living in cities actually have some positives that he ignores?