Iain Ferguson - Politics of the Mind: Marxism and Mental Distress 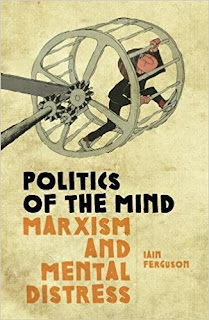 Iain Ferguson begins his examination of the politics of mental distress with a look at how people in Britain are suffering:


In 2012, more than 50 million prescriptions for anti-depressants were issued in the UK, the highest number ever. In some parts of the country, such as the North West of England, one in six people are now prescribed anti-depressants in an average month.


In June 2017, the Guardian newspaper reported that prescriptions for 64.7 million items of antidepressants were dispensed in England in 2016 - a staggering 108.5 percent increase on the 31 million... dispensed ten years earlier.

These shocking figures tell us two things, argues Ferguson. Firstly people in the contemporary UK are experiencing extraordinary levels of stress, depression and other forms of mental distress. Secondly, the dominant approach that the health service has to this crisis is to offer drugs. Later in the book Ferguson explains that there is good reason to question whether the application of drugs like this is in any way a solution.

But the majority of his book is to try and understand the history of how medical science has approached the question of mental illness and distress and what this tells us about today's practice. In addition he argues that a health policy informed by Marxism can offer a better approach that harks back to earlier forms of treatment.

Despite it's short length there are very useful sections on Freud, Lacan and more recent thinkers such as the psychiatrist R.D. Laing. The attempts by such scientists to understand mental health contrast strongly with the medical approach that simply sees mental distress as rooted in biology. The medical model of mental health, the "increasing medicalisation of everyday life" leads to the private interests of corporations rather than a "humanitarian or altruistic concern" shaping approaches to healthcare. Ferguson quotes Richard Bentall:


When considering the role of the pharmaceutical industry in psychiatric research... Drug companies are no more driven by the desire to do good than the manufacturers of automobiles, canned soup or other household products.... They are willing to use any and every method to promote their products...who have learned (or been taught) to look to the medical profession for solutions to a wide range of physical, social and existential ills.

In contrast Ferguson stresses a number of strategies that involve putting the patient's situation in the context of their wider history, relationships and experiences. He also emphasises the importance of the growing movements of "mental health service users" whose experiences and needs are often sidelined in discussions about treatment. These come together in an excellent chapter "new challenges to psychiatric hegemony". Here Ferguson challenges the dominant medical approaches and celebrates alternatives that have a more social  approach:


A model for mental distress which recognises - and provides empirical evidence for-the casual role played by early life experience, poverty, inequality, racism, sexism and other forms of oppression in the genesis of mental health problems is a huge step forward from a model which locates such problems primarily in faulty genes or biochemical deficiencies. The fact also that the new paradigm does not discount genes, brains and biochemistry but rather emphasises the interaction between our brains and our environments... allows for a much more dialectical understanding of mental distress.

But this takes place in the context of a health service that has been decimated by years of Tory cuts and the scapegoating of mental health service users. So Ferguson cautions against simply dismissing existing treatments - we need to fight to protect existing services, and make them better. Not allow austerity measures to be given progressive cover.

Ferguson goes further. He shows how capitalism distorts our lives and undermines what makes us human. Mental distress may be encouraged by poverty, racism, sexism or oppression. But the very system is irrational. Our lives are taken from us, wasted and our skills underutilised - we are atomised, made to compete with each other when we are used to cooperating and working together and a tiny minority get rich on the backs of everyone else's labour. If you wanted to design a system that created mental distress you couldn't find a better one than capitalism.

But Ferguson also points out that when people collectively challenge their situation and fight back against capitalism they often find their mental health is improved. On a small scale, it's why protests and pickets are often so happy - we are challenging our enemies and working together. He quotes an eyewitness to the Egyptian Revolution describing how everyone had a "new sense of agency". They were, albeit briefly, masters of their future. It's a small glimpse into how the world might be a better place one day. In conclusion I'd like to finish with a quote from a famous study that Ferguson uses in his book. Its a study of depression in women in the 1970s, and the authors conclude:


While we see sadness, unhappiness and grief as inevitable in all societies we do not believe this is true of clinical depression.

Iain Ferguson's book is important because it looks at what we can do in the here and now to improve people's mental distress but how we can also envisage a society where that doesn't happen.

Read an interview with Iain Ferguson about his book here.

Swain - Alienation
Slorach - A Very Capitalism Condition: A History and Politics of Disability
Posted by Resolute Reader at 7:12 pm