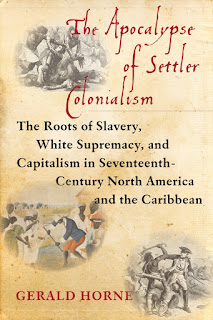 In the introduction to his latest book historian Gerald Horne makes clear the consequences of European settlement in the Americas:


Though disease spread by these interlopers is often trotted out to explain the spectacular downturn in the fortunes of indigenous Americans, genocide - in virtually every meaning of the term, including volitional acts by invading settlers - is the proximate cause of this towering mountain of cadavers. Thus, even when enslaved Africans chose suicide, which they were often forced to do, it would be follow to suggest that enslavers were guiltless.

It is a deliberately provocative conclusion and the tragedies that resulted from European colonialism is horrifically documented in Horne's book. But his book is more than a simple description of the genocide against indigenous peoples and African slaves. It explains the pattern of colonialism in the Americas through the development of capitalism.

While British colonialism came to dominate in North America, the initial thrusts were made by countries like Spain and Portugal. But the success of the Bourgeois revolution in England enabled that state to more effectively deploy its wealth to strengthen the position of its merchants in the Americas. The defeat of the aristocracy by the merchant class, as exemplified by the execution of Charles I and the consolidation of their power in 1688 meant that they were freed up to maximise their profits. This meant the transport of millions more slaves, their brutal exploitation on the plantations and the selling of the products of their labour back in Europe.

Not only did 1688 allow the merchants more freedom to engage in profit making, it also explicitly encouraged them to do this through the slave trade, which now was directly between Africa and North America, by-passing the Caribbean. Horne writes that


as slave owning became widespread, it became more difficult to limit slave trading to the aegis of the Crown, and one of the revolutionary demands of the 'Glorious Revolution' of 1688 in London was the deregulation of this hateful commerce and the entrance into it of 'private' traders.


Later Horne points out that later generations of Marxists and radicals hailed "the resultant growth of the productive forces" but the victory of the Bourgeois Revolution "was a staggering blow to Africans and Native Americans: it was the dawning of the  apocalypse".

If I have a disagreement with Horne's analysis here, it is only to say that not all Marxists "celebrated" the reality of the Bourgeois Revolution, just as there is a crude Marxism that sees history as a series of gradual steps upward there is also a Marxism, in the real tradition of Marx and Engels, that understands history as a series of transformations and capitalism's success as a defeat for millions of people. As Marx famously wrote in Capital:


The discovery of gold and silver in America, the extirpation, enslavement and entombment in mines of the aboriginal population, the beginning of the conquest and looting of the East Indies, the turning of Africa into a warren for the commercial hunting of black-skins, signalised the rosy dawn of the era of capitalist production. These idyllic proceedings are the chief momenta of primitive accumulation. On their heels treads the commercial war of the European nations, with the globe for a theatre. It begins with the revolt of the Netherlands from Spain, assumes giant dimensions in England’s Anti-Jacobin War, and is still going on in the opium wars against China, &c.

But Horne does not limit his study to the economic causes of the Apocalypse. He also explains that there had to be a ideological justification for what took place. This means the development of "white supremacy" and racism. One of the running themes through the book is that slaves and indigenous people constantly rebelled. The ideology of white supremacy justified enslavement and repression, and drove a wedge between the slaves and the poorest whites. Horne shows how this can be seen in the historical record:


Pessimism reigned as the colonial elite could not unite the Gordian knot of bringing in more Africans to produce immense wealth while preventing them from rebelling and taking power - which finally occurred in 1791 in what became Haiti. The governor of Antigua remarked during this fraught seventeenth-century moment that his island, like others, was beset by 'great supplies of Negroes and no whites.'.

To this Horne appends, "Note the term 'white' that was rapidly supplanting Christian to describe Europeans."

Capitalism's drive to accumulate wealth spelt disaster for millions of people, for entire ecosystems and whole societies. The very infrastructure of great European cities is built on the blood and sweat of slaves in the Americas. When trying to understand the nature of the United States today we cannot forget the invention and use of white supremacy to justify mass enslavement. But racism has deep roots in modern capitalist society and so while Horne finishes his book with a demand that there should be reparations to repair this historic crime, he also argues that there has to be a challenge to the system itself. It is not enough to debate with the American Civil Liberties Union "about the 'rights' of fascists" he argues, and instead it would be better to spend time talking with "potential and actual allies in Beijing, Moscow, Havana, Brussels , Pretoria and elsewhere". These are the sort of networks of solidarity that we'll need to end white supremacy and its capitalist parent once and for all.

Horne's book is a brilliant intervention into contemporary debates about racism. It is a powerful weapon that argues the problem is not just a far-right US President or a growing number of fascist protesters, but a system that is built on the back of slavery. I highly recommend it.

Posted by Resolute Reader at 9:33 pm