J.L.Carr - A Month in the Country 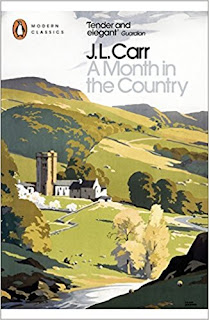 A few years after the end of World War One, Tom Birkin, a survivor of Passchendaele and a victim of shell shock finds himself in the tiny village of Oxgodby with the job of restoring a medieval painting in the church. Tom arrives in Oxgodby in the pouring rain, yet the weeks he spends there turn into a idyllic summer that he can only contrast with the rain and mud of Flanders. The rainy arrival symbolises his transition into a new era of his life, but the story of what takes place in that summer is told in retrospect - Tom himself only understands it long after he leaves.

As he uncovers the painting he gradually understands that its a masterpiece, a painting of the last judgement, with the damned being condemned to hell and the others rising up to join the heavenly host. The symbolism here isn't difficult to spot, but Carr doesn't force it down the reader's throat, instead he uncovers it slowly, like Tom's restoration.

There are surprisingly few main characters, though Tom's close friendship with Moon, and archaeologist on a similar quest to find a lost grave in the churchyard is touching. They are both veterans of the War, though in very different ways. Moon spots, long before Tom does, that his friendship with the vicar's beautiful wife is becoming more than that and if there is any dramatic heart to the story it is what happens to the two of them.

Tom uncovers a painting; Moon finds a grave and everyone else in the village spends the summer getting the harvest in and going to Church or Chapel. While little happens in terms of a narrative, much takes place. There is a hilarious comic set piece in a music shop where the rivalry between Church and Chapel becomes very real. There's also a moment of pure pain when, without giving away the details, Tom is confronted full on with the consequences of the War. His screams of rage into the empty fields are truly tragic.

This is a beautiful novel - every page celebrates humanity with all its strengths and weaknesses. Despite being written in the late 1970s it feels like an autobiographical sketch by a survivor of the War. That it isn't, is a tribute to the author's ability to make the past a living thing.
Posted by Resolute Reader at 10:26 pm