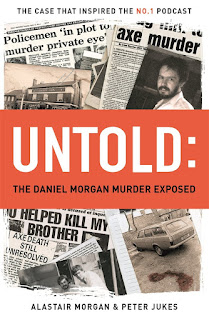 Private investigator Daniel Morgan was brutally murdered in 1987. Thirty years later, the case is "the most investigated murder in British history", yet despite this no one has ever been punished for their involvement in the killing. This remarkable book is the story of Daniel Morgan's family's struggle for justice. It is a book that exposes the rotten heart of the British justice system and forces the reader to confront ugly truths about our police forces.

At the heart of the story is the killing of Daniel Morgan. His brother Alastair and the rest of Daniel's family begin by trying to get justice but almost immediately they found themselves stunned by the inaction of the police and investigative failings. However it rapidly became clear that there was much more to the case, and as the family constantly put pressure on the police more and more dirt is exposed.

It is likely that Daniel was killed because he was about to expose major police corruption and collusion in criminal acts in a newspaper story. Anyone who has been paying any attention to British current affairs for the last thirty years knows that the behaviour of the police has increasingly come under scrutiny. It should come as no surprise that the justice system that failed so many people like the Birmingham Six or the Guildford Four would have institutional failings. One of the formative political campaigns of my life was the struggle for justice for Stephen Lawrence, the teenager killed in a racist attack in South London. That the police were found to be institutionally racist out of that campaign was a real victory. What Daniel Morgan's case shows is that there was also deep seated corruption in sections of the force at the time and it is likely that this is the reason he was killed. This begs the question, as the authors point out, who knew in advance about this? As they explain:


Yet rather than one issue of police corruption, Daniel might have uncovered many of them. Rather than the crime itself, he might have focused on the conspirators and discovered a network of corrupt police officers. The mention of a 'management committee' organising the murder and cover-up seems plausible. If there was a conspiracy to murder Daniel... then cover it up using police personnel, it would need to be carefully planned.

All the indications... suggest it was meticulously organised .The removal of incriminating evidence from all Daniel's belongings and the abortive media campaigns calling for more information suggest the conspiracy was in operation long after the murder too. Subsequent cover-ups may have escalated to hide the initial conspiracy... With the revelation of a network of corrupt police , dozens of trials could have collapsed and convictions been rendered unsafe. Senior officers may have decided then that burying the true story around Daniel was the lesser of two evils.

So the story's tentacles stretch far beyond the car park where Daniel was killed. There are multiple links to the News of the World phone hacking scandals. After the then PM Gordon Brown spoke in Parliament about the "criminality surrounding the News of the World" Alastair writes:


I was reeling. This was another example of how my brother's unsolved murder and its cover-up had spread so rapidly through so many institutions. I had warned about the dangers of leaving the corruption around Southern Investigations to fester decades before, and now another symptom of the rot was playing out"

I have deliberately avoided trying to retell Untold's story in this review. Partly this is because I would encourage readers to read it themselves, but if you would like a short summary then I recommend this Socialist Worker piece on Daniel Morgan's murder.

As a longstanding political activist I have no love of the police, nor any illusions in the British state. Yet I still found myself repeatedly shocked by Untold. Indeed this is one reason why I would encourage people to read the book, as it exposes the reality of British justice. There is no doubt that without the dogged persistence of Daniel Morgan's family his murder would have been forgotten long ago.

If there is to be any justice for the Morgan family then it will only be the result of ongoing campaigning work. One way to help them is to read this book. Another is to visit the campaign website.