Ken Follett - The Pillars of the Earth 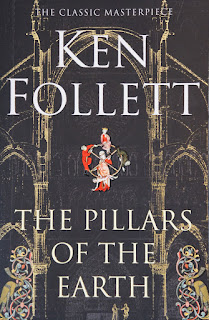 Ken Follett's The Pillars of the Earth is, to the surprise of the experts, one of the most popular novels in the UK. Its sweeping story has been made into a TV series, and even board and computer games and spawned two sequels. The plot covers a largely unknown period of English history, the turbulent 12th century when England was engulfed in Civil War following the death of Henry I's only male heir.

Follett's book is primarily centred on the monastery and settlement at the fictional location of Kingsbridge. There's a  complex web of characters most of whom are hard not to emphasis with, and principally the story looks at those involved in building a cathedral at Kingsbridge and those trying to stop them. What makes the novel work is that the personal antagonisms of various characters, including the vile Earl William and the pious Prior Phillip is in the context of feudal relations and Civil War. William's violence and raids on settlements around his castle are a natural part of feudal society, as are the inter-generational feuds. If the novel overly relies on the ideas of good lords and bad lords, it doesn't neglect that all lords relied utterly on the peasantry to survive.

In fact I suspect that this is one of the reasons for the success of the books. Unusually Pillars of the Earth focuses on the lives and struggles of ordinary people - mostly labourers on the cathedrals, but also their partners and families. While the elite have their role in the book it's often peripheral to the main action, and there are far more detailed descriptions of the lives, labour and food of ordinary people. This is actually quite unusual in novels and works well here, particularly a book that has the hard work of the building of a cathedral at the centre of its epic tale.

There are problems of course. To me the book felt like a soap opera in places - each chapter seeming to end on a cliff hanger that was rapidly resolved by the cleverness of one or other of the "good" characters. There are also a few unlikely coincidences and plot points that don't really make sense (would a grieving husband, having just buried his wife, really jump into bed with a complete stranger a couple of hours later, especially given they were both starving in the midst of winter?) I also found the rape scenes unnecessarily detailed - I get that the author is trying to describe the brutality of a particular character, but it was simply too much. I also skipped a three page sex scene, not out of prudity, but mostly because it was utterly peripheral to the plot.

Nevertheless Follett's book is entertaining. He gives an interesting take on key events in the period and the structure of the book keeps the reader engaged. It's also rare that a novel manages to make the transition from Romanesque to Gothic religious architecture an interesting and integral part of its plot, and it shows well how ordinary people were a central part of that movement.