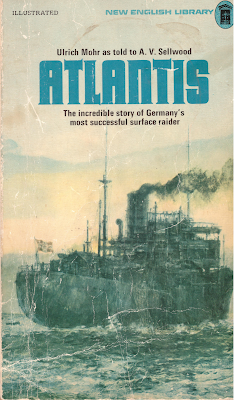 This is an interesting, and unusual account of the war against shipping in World War Two, for two reasons. Firstly it is, unusually, from the German point of view and secondly because the voyage described was in itself unusual. The ship at the heart of the tale is the Atlantis, a surface raider along the lines of many similar craft from the First War, that distinguished itself by disguise and manipulation to sink Allied merchant vessels.

There are some great oddities - not least the ship itself. The captain brought about a load of prams so crew could dress as women pushing children about and lull the enemy into a false sense of security. But suddenly the flags would rise, the hidden batteries open and if the enemy used their wireless to warn the admiralty then gunfire would silence them. Atlantis was very successful in what she did. and at least according to the contributions from enemy captains and prisoners, she was almost unique in that she looked after captured merchant sailors.

Ulrich Mohr, his captain Admiral Bernhard Rogge and others are keen to distance themselves from any link to the Nazi regime. Quite the contrary. Mohr argues that they were sailors first and foremost with little allegiance to the fascists. Me thinks the writers protest too much - they would like to portray their adventure as a purely military event, but there's no doubt they were pleased with their successes and their rewards. At the end Mohr points to the reality of Nazi Germany - with industrialists raking in profits and "party member" getting the wives of the sailors. Yet even the condemnation of industrialists smacks of Nazi propaganda rather than genuine, left, class anger.

That said, this is a startling voyage. Atlantis and her crew were ruthlessly efficient and good at what they did, and there are some fascinating insights. Their over-Winter on the remote, Antarctic, Kerguelen Islands is fascinating. As is their "German" viewpoints on war news. I was struck by a couple of references to discipline, including the punishment of sailors of "homosexuality" activity. Of great interest were the German's own fascinating with the colonial sailors on the British ships - Indian and Chinese men - who were swiftly brought into working in the kitchens for the Germans. There's some fascinating commentary on British colonialism here for those that would like to look for it. There certainly is far more mention of the reliance of the British naval effort in World War Two and crews from the colonies in this by the "enemy" than you might find in most similar accounts by British authors.

Overall though this book offers insights into a particularly vicious sea battle whose tactics will not be seen again - though take the authors' political claims with scepticism.

Posted by Resolute Reader at 11:32 am

This is an interesting one. Virtually EVERYTHING I've seen about the WW2 Kriegsmarine focuses on U-boats, with occasional mentions of the short-lived Bismarck.