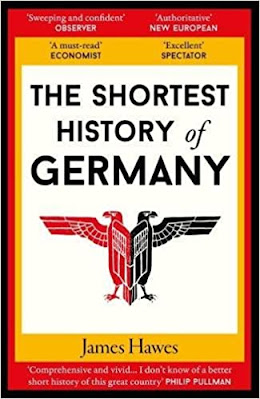 James Hawes' The Shortest History of Germany is a bestseller. This shouldn't be a surprise. The historical trajectory of the twentieth century was fundamentally shaped by events in Germany and today the country remains a powerhouse in terms of the European economy, central to events in the wider region. German history remains of interest to the casual reader as much as the academic historian. Hawes' book promises to explain it all in short, accessible bites to the reader. Unfortunately I think the book is utterly inadequate and its conclusions leave the reader open to dangerous conclusions about what happened and why in the mid-twentieth century and beyond.

In short, Hawes argues that to understand modern German history we have to look into the distant past, and sees the fault lines of Germany society arising out of fundamental divisions that go back to the era of the Roman Empire and Charlemagne. He concludes that "Germany is the sole hope for Europe... it must now be embraced, as what it was always meant to be: a mighty land at the very heart of the West".

Germany, Hawes argues, has always faced two ways: West and East. The western looking side has had a progressive, modern outward looking world view and the East has been the source of chaos and danger. Take the question of Hitler's victory. Hawes rightly points out that Hitler failed to get a majority of votes, but he argues that the key determining factor of this was the religious background that people had, and that was shaped by the historical development of Germany. He then argues that this is rooted in the ancient past:

In many areas within the Roman limes [borders] of 100Ad, Hitler fails to break 35%... The average here overall is well under 40%. Even with the whole state apparatus behind him... Hitler has failed to take the west and south of Germany. In fact, only two constituencies within the bounds of Otto the Great's Empire of 940AD. give Hitler a majority - and they both lie right at its eastern limits, on the western banks of the Elbe.

Correlation is, of course famously not causation. The problem with this argument however, is it basically implies that everyone east of the Elbe is always going to be right-wing. Such geographical explanations are inadequate, but Hawes dishes them out with gusto. Of East Germany he writes, it "didn't become different because of the Russian occupation of 1945-1989; the Russian occupied the place because it had always been different". Surely most readers here would pause and point out that the Russian's occupied Eastern Germany because they arrived from the East.

What Hawes fails to offer the interested reader is any explanation for events. History is, to paraphrase, "just one thing after the other". For Hawes, the Nazis arose because Hitler was able to manipulate people to accept him in the chaos that followed the first World War. But Hitler was able to do this because the chaos had been caused by the left. The new German government after World War On had "no reliable forces of its own" so it had to turn to the "Free Corps" to crush the "red rioters". Yet the revolutionary period that followed World War One was one of mass mobilisations by German working people fighting for jobs, equality and freedom - not a few rioters. Time and again Hawes blames the Communists for wanting to overthrow the "new democracy" despite that new democracy being vicious towards ordinary people as it tried to save capitalism from itself.

Hawes argues that Hitler was successful because the Nazis deliberately copied "the street fighting style and the modern-seeming politicking of the new, Lenin-inspired left". In fact, at times, it seems that Hawes' real targets are the left. Completely incorrectly he writes that "Hitler's ideas were closer to Lenin's than to any traditional European conservatism", neatly ignoring the rabid antisemitism and racism at the core of Hitler's ideas and his stated counter-revolutionary agenda. Hawes doesn't mention how the first victims of the Nazis were the left, and especially the Communist left, despite them allegedly being so "close" in ideas. In fact Hawes' characterisation of the left and the far-right is shockingly incorrect:

Both Lenin and Hitler appealed to perverted versions of that great 19th-century liberal ideology (as seen in Hegel, Marx and Darwin): the idea of progress-through-struggle-to-utopia.

Hawes' argument that Marxists believe in "progress-through-struggle-to-utopia" doesn't stand up to scrutiny, whether in the work of Marx, Lenin or German socialist thinkers like Rosa Luxemburg. It is, of course a feature of Stalinism and Second International Marxism, though Hawes only sees continuity from Lenin's era to Stalin when he should see a break and seems to celebrate the entirely pro-war Second International. But Hawes' generalisations are also worrying. He presents Hegel as "the root of all evil?" but neglects to discuss some very dangerous thinkers who were real influences on the far right - figures like Schopenhauer, Nietzsche and Spengler.

This might all be of historical curiosity, but this approach mars Hawes' discussions of post-war politics. The problem is that Hawes' instinctive conservatism cannot really explain the dynamics of German history. He doesn't really offer any explanation of why the German economy tanked in the 1920s, and he seems to have no sympathy with the ordinary Germans that rebelled in vast numbers against the capitalist destruction of their jobs and livelihoods. Because he sees the Russian Revolution as a bad thing, he cannot understand its influence on a generation of radicals, even after the Stalinist counter-revolution. Indeed he can only see continuity and similarity between the right wing in German and the interests of Stalin's Soviet Union.

A book of this length is always going to take some short cuts. But Hawes fails to offer any real in-depth explanation of key events, relying on superficial generalisations. His concluding remarks about the AfD, UKIP, Brexit and Britain and Germany, feel like a crude attempt to shoehorn contemporary political prejudices into a book length framework that doesn't really work. His hope that Germany and Europe will get a "vision of a land treated as, and working  as, the very heart of the West" is misplaced precisely because it ignores the real economic and political forces that shape the terrain that German politics takes place on. The current economic crisis will place new strains and stresses on the German people, and progressives will need more nuanced historical accounts and clearer politics if they are to avoid history repeating itself.

Kershaw - To Hell and Back: Europe 1914-1949
Browning - The Origins of the Final Solution
Paxton - The Anatomy of Fascism
Mazower - Hitler's Empire

Posted by Resolute Reader at 9:04 pm

Email ThisBlogThis!Share to TwitterShare to FacebookShare to Pinterest
Labels: Germany