Christopher R. Browning - The Origins of the Final Solution 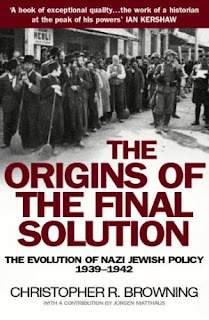 Reading and reviewing books about the Holocaust is no easy matter. Christopher Browning's book is no exception. The material is horrific less because of gruesome detail and more because of the sheer scale of murder that takes place. Page after page, paragraph after paragraph mentions the deaths of thousands of people - Jews, Gypsies the mentally and physically disabled, Soviet prisoners of war, enemies of Hitlers' regime.

Browning seeks to understand precisely how this could take place. How could a single state reach the stage where six million Jews were killed, and perhaps four million other in a mechanised, bureaucratic way way? The answer is not easy, and has many lessons for today.

Browning argues early on in the book that Hitler and the Nazis did not begin with the concept of genocide - though its important to understand that they did not fear or oppose murder of their enemies on any scale. The Holocaust has its origins in both the fanatical anti-Semitism of the fascists and their belief in conquering and rebuilding Europe in the interests of the Nazi state. (This is something that has been also explored by Mark Mazower in his Hitlers' Empire, reviewed by me here).


Hitler's belief in the need for German Lebensraum implied that the Nazis would construct an empire in Easter Europe analogous to what other European imperial powers had constructed overseas... this also meant that the Nazi regime stood ready to impose on conquered populations in Europe... the methods of rule and policies of population decimation that Europeans had hitherto inflicted only on conquered populations overseas.

However the particular nature of Nazi colonialism, coloured by its violent anti-Semitism and racism meant this would inevitably lead to mass murder. The execution of Jews, prisoners and undesirables that accompanied the German army's entry in Poland and the German Wehrmacht's "feeble resistance to even the earliest manifestations of mass murder" permitted this.

Browning takes us through the different stages of the development of the Holocaust. The early attempts to relocate Jews to the East. Latter plans, that reached a surprisingly level of organisation, to turn Madagascar into a Jewish state run by the Nazis, and finally the way all of this was shaped by the invasion of Russia. None of this can be separated from the particular nature of Hitler's regime or those who managed it. Their appalling racism drove the mass murder forward, to the extent that it became the only answer to the problem of where to put the Jews being forced out of their homes in Germany, Austria and the conquered territory of western Europe. Browning details how the different stages followed each other, even in the way that the gassing of victims began as a way of dealing with the mass killing of the disabled, but then became a way of coping with the realities of mass-shootings - soldiers were unable to cope with the death. Once each decision was made it led to other follow up decisions that made further mass murder more likely. As Browning concludes:


The extermination camp was not an accident. It did not result from some mysterious process of spontaneous generation. It was a horrific monument to the perpetrators' problem-solving abilities, but they needed lead time to invent and construct it.

One aspect to this that I felt could have been developed further was an attempt to understand what led people to do this. Browning does explain the way that the particular nature of the Nazi state and its ideology helped legitimise murder, through its demonisation of Jews and others. But I think this is only part of the question - other aspects have to include the particularly brutal nature of the genocidal war on the Eastern Front, and, most importantly, that Hitler rose to power on the back of a mass movement aimed at destroying his enemies through a rhetoric of blaming Jewish-Bolshevism for Germany's economic problems. This created an mass layer in German society, won to the idea that Jews were the enemy, filled with racism and loyal to the regime. (I read this piece by Alex Callinicos at the same time and felt it helped fill in the gaps). It helps explain why Germany continued to fight for so longer after defeat was obvious, and it also makes us understand the particular nature of Nazi Germany that meant the Holocaust could take place.

This isn't a pleasant book to read. But it is an important and carefully researched one. Every argument made by the author is backed by examples and reference. It will fill the reader with sadness and horror. But it will also make them keen to fight racism, bigotry and anti-Semitism today and to organise against the fresh appearance of fascist movements in the 21st century that would seek to emulate Hitler.

Mazower - Hitler's Empire
Moorhouse - Berlin at War
Black - IBM and the Holocaust
Paxton - The Anatomy of Fascism
Sereny - Into that Darkness
Posted by Resolute Reader at 7:43 pm