Matthew Cobb - The Resistance: The French Fight Against the Nazis 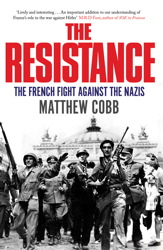 Given the importance of the French Resistance to the narrative of the Second World War that we hear so often in the UK, it is surprising that so little in English has been written about it. Our image of the Resistance is shaped all to often by the stereotypes in Allo Allo or spy novels. Indeed much of the non-fiction that has been published tends to concentrate on the British contribution, through the work of the secret services during the war.

In the further reading section of his book Matthew Cobb bemoans the lack of English language work on this important period and contrasts this with some 3000 books written in France. Thankfully Cobb's own history is a brilliant summary of the struggle against the Nazi occupation and one that doesn't shy from raising wider political and cultural questions.


It is easy to think of the French Resistance as being a few brave individuals clutching tommy guns and blowing up railway tracks, as well as helping Allied soldiers escape the clutches of the Germans. This did occur of course, but it was far from the only work of the resistance. If this was the only way that French people resisted, then it would have been difficult for the numbers to take part who did. That said, Cobb points out that less then two percent of the total population were involved in the Resistance and that for "most of the war, the vast majority of the French did little or nothing to oppose Vichy and the Occupation". This should not be a surprise. Standing up against the vicious brutality of the fascist occupying force took bravery. Of the half a million or so active résistants 100,000 died in the concentration camps. Cobb also makes the point that many acts of resistance stopped far short of using explosives, though they remained morally and politically important - the wearing of the French colours, listening to the BBC and discussing the news, or helping Jews.

Active resistance work took bravery and enormous commitment. Cobb mentions Andree de Jongh, a Belgian woman who organised an escape route for Allied airmen. She had contacts from Belgium to the south-west of France and accompanied almost all of her "charges" to freedom. Cobb writes that "in the space of 16 months she cross the Pyrenees 35 times, taking 118 evaders to safety". Eventually de Jongh was captured and taken to a concentration camp, though she, unlike many, survived the war.


There are some fascinating accounts of acts of resistance in this book and many of the tales of ordinary people taking up arms are inspiring. However Cobb also takes time to explore some of the other forms of resistance that have rarely been discussed this side of the Channel. For instance Cobb discusses the mass strikes and protests that at times involved thousands of ordinary French workers.

On May Day 1942 a series of demonstrations took place that involved significant numbers of people. The preparation for this again shows how organised the resistance could be - 120,000 newspapers and 250,000 "tracts" were distributed to promote these protests. In Marseilles and Lyons tens of thousands marched, their slogans including "Long Live de Gaulle". At other times during the war, acts of resistance were inseparable from wider economic questions. In June 1941 a mass strike of miners was the first example of large scale opposition to the Occupation. This was driven by the Nazi demands for raw materials from occupied countries to fuel the German war machine as well as demands for better working conditions. A hundred thousand miners, supported by their families refused to obey the Nazis. But they also refused to follow instructions from their management - not all of the French saw the Occupation as against their interests. Several hundred men and women were deported, many never to return. The strike however, despite the vicious reprisals did demonstrate, as one miners' leader said at the time, that "From now on, the Occupier knows that workers who suffer in misery will not always accept the yoke of national oppression."

The miners' spirit indeed the traditions of the French labour movement, would re-emerge on a number of occasions during the war. A number of important factories making components for German industry suffered frequent sabotage and as Cobb shows, quite a few of these required the inside knowledge of workers in the plant. On occasion, management were effectively told by the Resistance to facilitate this or face destruction of equipment on a larger scale. The Normandy Invasion in 1944 was accompanied by large scale acts of sabotage and a further miners' strike. Cobb is careful to point out that it was the Allied armies with their enormous amounts of manpower and equipment that liberated France. But the role of the Resistance at this important moment was crucial to making that a success.

Once again, we might be unaware of the scale of this. So it's worth quoting Cobb here;

"The level of Resistance action was proportionally on the same massive scale as OVERLORD. Within twenty-four hours, the railway network had been paralysed by up to 1,000 acts of sabotage.... Locomotives were destroyed, trains were derailed and bridges were blown up, reducing rail traffic by fifty per cent. Fifty-one trains stuck in a traffic jam  around Lille were easy pickings for Allied aircraft..."

The invasion led to a flood of people getting active. Elsewhere in France a number of cities and areas were liberated by their populations, occasionally too early to avoid being crushed by Nazi forces. The declaration of the Free Republic state of Vercors is a forgotten moment of revolutionary history. The battle that followed required a full scale onslaught of Nazi forces before the résistants were destroyed. SS parachutists and special forces used gliders to assault the liberated area. While a hopelessly one-sided battle that left hundreds of French people dead, these were no doubt forces that had to be diverted from the battles against the Allied forces. Many villages, towns and cities were liberated, not by American tanks but by the people themselves. Cobb says that there were over thirty insurrections that helped kick out the fascist forces, most famously in Paris.

Such acts terrified the Allied leaders. Even some of the right-wing Resistance leaders had recognised early on in the Occupation that the resistance forces could be the beginnings of a "revolutionary army that could transform French society in a socialist direction". Certainly some of the factory occupations that took place following D-Day and during the liberation of France resembled the beginnings of workers power. A terrified de Gualle did everything he could to prevent these sort of actions spreading, while the role of the Communist Party, at the heart of the resistance, both helped inspire such actions and limit them. Towards the end of the war the CP were making it clear they no longer wanted a revolution, but wanted a part of the government that would follow the war.

However some in the Resistance, often those influenced by Trotskyist ideas thought much harder about what sort of struggle would get rid of the Germans and transform society. In some cases Trotskyist and Communists produced literature aimed at the occupying forces, including a German-language paper Soldat im Westen. A Trotskyist in Paris also organised a network of German soldiers around another newspaper and argued that they had a common fight against Fascism. Ultimately these networks were smashed, but showed the potential for the war against fascism to develop in much wider directions.

Much of Cobb's book details the ins and outs of the leadership of the Resistance. Initially the Resistance was looked at with scorn by the Allies. De Gaulle himself had little interest and barely mentions it in his own memoirs of the war. However the actions of men and women on the ground forced him to take it seriously and millions of French people saw De Gaulle as the personification of the struggle against the Occupation. De Gaulle had no interest in turning the struggle against fascism into a wider re-arrangement of French society and when Paris had been liberated he callously dismissed the individuals who had gathered to welcome him on behalf of the Resistance movements.

Cobb includes his book with an examination of the historical importance of the Resistance, particularly its influence on French identity and culture. There can be no doubt that this is significant, but as the years passed there was a reshaping of official memories. French society also had to cope with the fact that many millions of people did not resist and, in thousands of cases, were active collaborators. While there was great sympathy with the suffering of the Jews, such as the solidarity acts of wearing of yellow stars by non-Jews in Paris, only one train was blocked from taking Jews to their deaths in Auschwitz. Cobb tells the story of this dramatic episode, which is worthy of a Hollywood film, but it is an isolated, if inspiring example. The truth is that thousands of French Jews did die, in part as a result of the acts of collaboration by French people, particularly those at the top of society.

In a few short years, the Resistance grew from an amateurish collection of individuals who new little of the basics of security, to a huge armies of armed men and women. Those who took part in this, whatever their own political ideas (though frequently these were shaped by left wing views) demonstrated that people would not collectively give in. The spirit of the Resistance helped shape the ideas of a generation and Matthew Cobb's book is a fine account of those who were prepared to stand up and be counted in the fight against fascism.


Vinen - The Unfree French: Life under the Occupation
Gildea - Marianne in Chains: Daily Life in the Heart of France During the German Occupation
Gluckstein - A People's History of the Second World War
Posted by Resolute Reader at 5:01 pm