Bill Gammage - The Biggest Estate on Earth: How Aborigines Made Australia 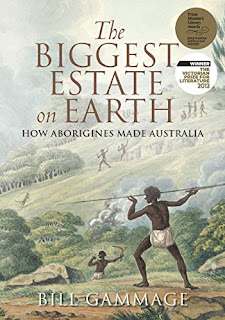 In The German Ideology Marx and Engels write "nature, the nature that preceded human history...is nature which today no longer exists anywhere (except perhaps on a few Australian coral-islands of recent origin)". They were arguing that the natural world is transformed by humans, constantly recreated and rebuilt. It is an insight that kept returning to me as I read Bill Gammage's excellent book The Biggest Estate on Earth. Gammage's contention is that the Australian landscape as seen by European colonial explorers, settlers and convicts post-1788 (the date of first arrival of the British first fleet) was not natural, pristine or untouched and certainly not terra nullius. Rather as the author says, "there was no wilderness". The Australian landscape was shaped by thousands of years of careful, planned human labour.

But this is not what those arriving from Europe saw. Instead they tended to interpret the landscape as a natural collection of park-like spaces. As Gammage explains "Almost all thought no land in Australia private, and parks natural. To think otherwise required them to see Aborigines as gentry, not shiftless wanderers. That seemed preposterous."

The reference here to gentry relates to the fact that hundreds of European accounts (Gammage quotes dozens and dozens of examples) describe the landscape as often being "park like". Park, at this time, referred to the type of landscapes created by wealthy British landowners. They were rich enough to leave landscapes laid out for pleasure - not to produce food, or generate wealth. It is, as Gammage suggests, peculiarly myopic to see these perceived landscapes and equate them with parkland in Europe, and conclude that they cannot have been artificial. It is also a view imbued with racism and class.

Much of the book looks at exactly how and why the aboriginal people shaped the land. There is a brilliantly illustrated section (in full colour) that uses paintings and old photographs as well as contemporary images to show how the landscape changed after 1788 when the land wasn't burnt back. Burning was the key way that land was cleared and the clearance allowed food to be grown or helped with the hunting of animals like kangaroo. The changes also meant that the destruction of aboriginal communities was also written into the landscape. Take this picture Mills' Plains by John Glover (circa 1832-1834).


Glover shows Tasmanians. They were not there in 1832, for in 1828-30 they were shot or rounded up by bounty hunters like Glover's neighbour John Batman. Glover knew this. He captioned his [painting] Batman's Lookout, Ben Lomond (1835) 'on account of Mr Batman frequenting this spot to entrap the Natives'. Yet he depicts not only their presence, but their absence. His Mills' Plains foreground shows young gums, wattles and casuarinas which all regenerate quickly after fire. They are young because Tasmanians burnt the old; they are there because Tasmanian burning was stopped. They are the first generation for decades not to get burnt, so their height measures the end of Tasmanian dominion.

Ironically the lack of burning also meant that some flora and fauna went extinct. The burning encouraged particular growth, or created ecological niches that were needed by certain animals. The end of burning led, for instance, "to the extinction or decline of over a third of small desert animals species."

The recent extreme bushfires in Australia have reawakened debate about how a return to regular backburning could help prevent future catastrophic fires. Gammage certainly provides ample evidence that this is true. But he also makes it clear that it wouldn't be easy. The Aboriginal people had thousands of years of experience and even sympathetic attempts to recreate this have failed: "They knew which fire regime worked" he writes. That said, the effects could be dramatic. As Gammage explains, Aboriginal people rarely had to deal with enormous fires because they rarely happened - because "people had to prevent it, or die". Gammage recounts a story from the 1870s:


When a fire menaced the station while its men were away, an [Aboriginal] elder studied the flames, then organised women and children to light spot fires in five staggered rows across the advancing front. This broke up the fire and it was put out."

But these skills with fire arose from long experience and a particular understanding of the natural ecology. I don't have space to cover Gammage's explanation of Aboriginal understanding of their relationship to history and space. But the "Law" he describes is an obligation on everyone to manage and protect the land as it was and is.


All must care for the and and its creatures, all must be regenerated by care and ceremony, no soul must be extinguished, no totem put at risk, no habitat too much reduced. That mandate, not the theology, made land care purposeful, universal and predictable. This is true of very part, even what might seem untouched wilderness, and even where ecologists today can't see why. The parks and puzzles Europeans saw in 1788 were no accident.

Thus the shaping of landscape was not technological, it was something that arose out of the very understanding that Aboriginal people had of the land and their place in it. There's a tragic story that demonstrates this, told by Gammage, of a small band of Tasmanian people, decimated by the colonial powers, who continued to fire the landscape, doing the work of ten times their number, to try and maintain the land - even though the smoke would betray their existence.

This approach can be contrasted with the settlers who saw the land with very different eyes. It is summed by a quote from 1864 by a surveyor WCB Wilson who wrote:


heavy showers fell which had a wonderful effect upon the hitherto parched up ground innumerable bulbous roots shooting up their long green stems in every direction and clothing the earth with a profusion of flowers.... It is very delightful to contemplate Nature in her holiday garbs, but unfortunately both the flowers and the coarse green grass are intrinsically worthless.

Gammage comments that Wilson "didn't value anything much". But here, summarised, is the new capitalist approach to land as a source of value. The landscapes that the Aboriginal people created where particularly prized by settlers, not simply for the clear areas, but also for the management of water courses, or the holding back of particular plants. But once they had control the Settlers couldn't maintain these landscapes and massive bush-fires are just one ecological consequence. Before 1788 Australia was very different, but so were the societies that lived there. Gammage concludes:


'Man' made such country home for at least 20,000 years. People civilised all the land, without fences, making farm and wilderness one. In the Great Sandy Desert women replanted yam tops and scattered millet on soft sand, then watched the seasons: millet crops a year after its first rain. This is farming, but not being a farmer. Doing more would have driven them out of the desert. Mobility let them stay. It imposed a strict and rigid society, but it was an immense gain. It gave people abundant food and leisure, and it made Australia a single estate. Instead of dividing Aborigines into gentry and peasantry, it made them a free people.

Marx and Engels pointed out that examining the economic basis to a society enabled you to understand its structures and social relations. Aboriginal society was based on a different relationship to the land and that enabled a much more equitable and sustainable world. Capitalism is the negation of that. Replacing capitalism with a sustainable world will not mean a return to the aboriginal communities from before 1788. But it will mean learning from their relationship with the land to ensure that future generations can enjoy it.

Bill Gammage's excellent and book is a powerful exploration of how we can understand non-capitalist social relations. He shows how modern Australia arose out of the destruction of a way of life, and consequently a landscape. He challenges racist myths about Australia's indigenous people and reminds us that things do not have to be like they are.

Pascoe - Dark Emu: Aboriginal Australia and the Birth of Agriculture
Posted by Resolute Reader at 12:13 am

Excellent review. Thank you for bringing back memories of my own reading of this book a few years ago.