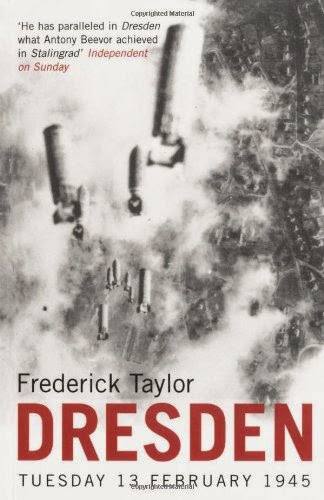 After reading this detailed, balanced and incredibly well written account of the destruction of Dresden in 1945, I am left with no doubt in my mind that those who ordered the attack committed a war crime. Taylor's eyewitness accounts and his historical research bring home the full horror of the firestorm that engulfed the hitherto untouched city, leaving tens of thousands dead, thousands more injured and homeless, with relatively little military impact. I don't think I will ever forget reading about the hundreds of civilians who died after climbing into a reservoir of water to escape the flames. The hastily built tank had been made to supply water for potential firefighter operations, and didn't include any steps to leave. After treading water for hours these people must have drowned horribly in the most appalling of circumstances.

Because of stories like these, and rumors of other atrocities by the Allies during the attack on Dresden it has always been a political hot potato. Figures of casualties, sometimes as high as 450,000 have been given, which has ultimately meant that February 13 1945 came to symbolize the very worst of the Allies. Two groups seem to have been most responsible for this. The first is the far-right and the neo-Nazis. Unsurprisingly Hitler's regime made huge propaganda out of the Dresden raid. But since the end of the Second World War the far-right has used Dresden to suggest that the Allies were as bad as, if not worse than the Nazi dictatorship. The attack on Dresden was Germany's own Holocaust they suggest.

As the Cold War continued, the Eastern Bloc too encouraged a view of the attack as symbolizing the viciousness of the US and British, prepared to murder thousands of civilians in a pointless attack.

As a result, Taylor's book has to tread through much myth and falsehood. As with the debate about whether or not US planes strafed civilians shows, memory is often little help to understanding what took place. A number of eyewitnesses say that US planes committed these war-crimes, but Taylor makes it clear, drawing on several detailed studies, that this didn't take place. This is an unpopular position in Germany today, and historians have drawn tremendous fire for even suggesting that such recollections are inaccurate.

Taylor puts the Dresden attack into historical context. Firstly he gives us Dresden's fascinating history, though I am not sure he needed to go as far back as the Roman era. In part this is to show just what was lost historically and culturally in the attack. But also it is to challenge those who argue that Dresden was not a military city. By the Second World War the city was an important transport hub (even more so when the Russian's broke through Poland and were closer to Germany) and a center for the manufacture of important components for weapons (such as optics).

The author also traces the history of air-bombing. Again this helps to put the attack in context. In particular Taylor examines the strategies of Britain's Bomber Command during the war. Here the key issue is the Chief of the Air Staff, Arthur Harris' insistence that Germany could be defeated through massive destruction of towns to undermine the country's ability to wage war. As a strategy this was clearly failing, and Taylor makes it clear the limits to the bombing (in particular inaccuracy, and the ease at which industry and transport recovered). Harris doggedly held onto his strategy as the war progressed. But by the time of Dresden, it is clear that massive destruction of cities could no longer be justified as a valid way of waging the air war, if it ever was. Of far more importance was destroying Germany's dwindling oil stocks, something that was widely accepted by the military hierarchy but dismissed by Harris.

That said Harris is not the only one responsible. Others helped selected targets, and Taylor makes it clear that Churchill himself approved a renewed offensive against urban targets, even though the Prime Minister rapidly distanced himself from the attack on Dresden.

But Taylor makes it clear that Dresden was not unique. For many of us, it feels unique, precisely because it has been such a political football. Taylor's comprehensive analysis suggests are far lower casualty figure than other headline numbers, he concludes


The fairest estimate seems, therefore, to lie between twenty-five thousand and forty thousand. This makes the loss of life in the city less than the total for Hamburg (although Hamburg possessed at least twice Dresden's population), and as a proportion of the total population, less than that for towns such as Pforzheim or Darmstadt.

This is not to downplay what took place in Dresden, but to show that it was part of a much larger, and more systematic destruction of German cities that targeted the civilian population. We remember Dresden because of the firestorm, but Taylor makes the point repeatedly that this was a particular set of circumstances, and barely a few weeks later the Allies might well have done the same to Berlin, as they did in Hamburg. In fact their bombing strategy was deliberately designed to create destruction and slaughter through firestorms. In Dresden the fascist authorities are also to blame. Their lack of shelters, lack of experience and their deliberate attempts to suggest that Dresden would not be attacked resulted in thousands of deaths. The bravery of ordinary German's in the circumstances reflected everything positive about humanity, in complete contrast to the barbarity of the city's government.

There is much more in this excellent book including a history of the Jewish community in Dresden, and accounts by those who survived. Taylor also demolishes the inaccuracies of writers such as the right-winger David Irving who has written extensively on the Dresden attack.

In clarifying what actually took place on February 13 1945, and why, Frederick Taylor has in no way diminished the suffering of Dresdeners. What he has done is to put it into context of the "total war" of both the Allies and the Axis powers. The lessons are there for all of us.

Kershaw - The End
Moorhouse - Berlin at War
Posted by Resolute Reader at 11:12 pm