Tim O'Brien - If I Die In A Combat Zone 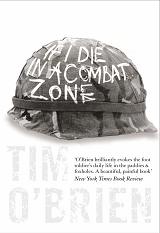 This Vietnam memoir follows Tim O'Brien from his basic training to his time on the front line in Vietnam. It finishes with his time in a safer post, behind the lines working in the administration. By the time he got there, he'd seen several friends killed and injured and dodged sniper fire in the places that became infamous for the massacre at Mai Lai.

While the storyline has become a fairly standard structure for the Vietnam film or novel (or indeed many other war stories), here it works because of the authors brutal honesty. He documents his plans to run to Sweden - researched in detail and planned in depth, because of his terror at going. He talks about the ineptness of one of his commanders and he admits to barely seeing the enemy during his tour of duty.

The power of the book, apart from its honesty, is the way in which we see reflected the greater struggles that take place. Hindsight gives us a particular set of images when we hear the name Mai Lai, but for Tim as he moved around there it was simply another place.

Definitely one of the classics that came out of that war, it'll help clarify the fears and emotions of those soldiers who went to Vietnam but also fueled the struggles against the war and against Imperialism.

GOOD BOOK, BUT THE ONE I FOUND THAT REALLY WOULDN'T LET ME PUT IT DOWN, BECAUSE OF IT'S HONESTLY AND EASE OF READING IS ( VIETNAM: NO REGRETS)FIND THIS ONE ON-LINE IT IS WELL WORTH THE SEARCH