Richard Fortey - Survivors: The Animals and Plants that Time has Left Behind 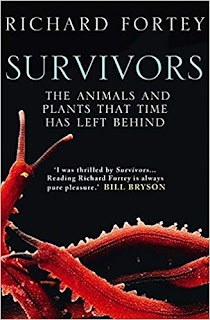 When I was much younger, sometime in the 1970s, I had a picture book of animals and rather fascinatingly to me it had a drawing of a living fossil, the Coelacanth fish. I was captivated by the idea that animals that had been alive in the distant past were still alive today. Around the same time I also watched that terrible film The Land that Time Forgot but I don't think I ever believed that there was anywhere were dinosaurs continued to exist.

The Coelacanth jumped into my mind as soon as I saw Richard Fortey's book. Many years later I was still fascinated by the idea that animals could survive into contemporary times. While this is not a history of evolution Fortey does tell the story in a roughly linear way, and so we begin with very early animals and plants to understand how some examples of these remain alive today.

The first thing to point out is that Fortey never uses the term "living fossil". As he explains, no living thing remains still, a species is in a continuous process of evolution, but with some we can see something very similar to their historical ancestors. Sometimes this is because an organisms "niche" the "place where it fits in, earns a living, reproduces" remains constant and so little change takes place. Quite a few of the organisms in this book are like that, particularly bacteria and so on. Others may have evolved elsewhere but found in radically different environments today. Cacti, Fortey points out "are now specialists for life in arid conditions in the Americas, but did they originate in damp forests in Gondwana?"

Despite my youthful enthusiasm for the Coelacanth, I was particularly fascinated by the examples of lifeforms that are close to those that existed very early on in Earth's evolutionary history. Of these the Stromatolites must be the most amazing example in this book. They look like "flat-topped cushions and low pillars, or even giant mushrooms expanding upwards like plush stools".  They are built up by tiny organisms, year after year, and so are not a single organism, but a "whole ecology". Usually such microscopic organisms would be eaten away, but in the special conditions where they are found today, a warm shoreline in Australia, would be consumers are absent. Fossil stromatolites have been found from as far back as the Archean era, up to 3.5 billion years ago. They are found in many different places around today's globe (Fortey recounts finding them in Spitsbergen as an undergraduate) and must have been very common. Seeing pictures of them today gives us a tiny insight into what life was like very early on in its evolutionary career.

As with Fortey's other writings this is highly personalised. His career has taken him to many places to
see many things and this helps make his books highly readable. Unfortunately this book's illustrations are reproduced very badly - in black and white, on paper - and much of the detail is lost. Luckily the internet allows readers to quickly find more useful examples.

Fortey ends the book with a discussion of how these creatures in their niches or Time Havens, face the pressures of environmental change. He points out though, that even if catastrophic climate change wipes out the vast majority of living things on Earth, small bacteria will still be there and that "the wheel of life will have turned full circle". It's a great book that gives an unusual insight into evolutionary history.