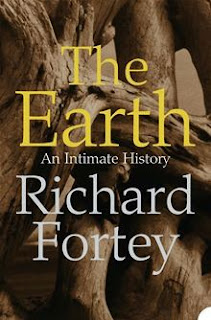 Geology as a subject is one that most people know very little about. Few of us understand the processes that formed the world around us. How did the landscapes get shaped? What caused the seas and oceans and why are mountains where they are? Rich Fortey's book is a extremely readable introduction to the history of planet Earth. Rather than tell a long elongated story that starts at the beginning and proceeds ponderously towards contemporary times, Fortey describes places that he knows well. His story is actually the story of the development of geology as a science.

Despite people having studied the Earth for centuries (usually in an effort to find valuable minerals) it is only very recently that the processes that have shaped the planet's surface have become accepted by the majority of scientists. The story of how "plate tectonics" came to be understood is one that involves a large array of different thinkers, each contributing small bits to the whole, and a few whose correct ideas were pretty much dismissed out of hand.

This history is fascinating but it also allows Fortey to dwell on places that demonstrate particular aspects of geological processes. While describing Newfoundland for instance, he doesn't simply explain why the east of the island is so different to the west, he takes us on an long journey through time that eventually ends up on the shore of a forgotten ocean, Iapetus. What begins as a description of the island, introduces the idea of shifting continents back through enormous lengths of time, until the reader can imagine the repetitive clashes of plates and then their fracturing as oceans close and reform over millions of years.

Fortey's writing is also wonderful. For a subject that rarely contains rapid change, he brings the subject alive, peppering his writing with literary quotes and pieces of poetry. He has the knack of making the reader understand the power of the Earth's internal forces and the majesty of their slowness. Take his description of the rock ("brownish, like spiced cake") that makes up many of the buildings, to say nothing of the surrounding landscape, of Sorrento in Italy:


This rock is called the Campanian Ignimbrite. Its origin was a catastrophe that happened 35,000 years ago: a gigantic volcanic explosion threw out at least 100 cubic kilometres of pumice and ash... An explosion of steam and gluey lava blew out a great hole in the earth... not so much a bite out of Italy's profile as a huge punch. A vast cloud of incandesccent material buoyed up with gas flowed like a fiery tidal wave across the limestone terrain. Lumps of volcanic rock were carried along willy-nilly in the mayhem....

Here he describes the mental work of scientists trying to understand the complicated history of particular landscapes, which have had millions of years of changes piled onto each other.


Structural geologists love such things. They read the flexures in the rocks with the certainty of a blind man reading braille. They can easily imagine what it is for a fold system to be caught up in anther subsequent phase of contortion, fold imposed on fold. I admire this capacity to think in three dimensions - four, if you include time - more than I can say.

While Fortey's language is wonderful, at times its near poetry distracts from the subject matter. It is easy to get carried away with the flow of the narrative, and miss the detail of what the author is telling us. In particular since geology is an unknown subject for me, I found it full of strange words and concepts and had to re-read parts to understand it all. I also kept having to remind myself that some of the things being described take place over eons, millions of years. The closing of the Pacific Ocean as the tectonic plates move towards each other is taking place at the speed of the growth of human fingernails. An apt metaphor that helps us understand why it will take around 350 million years. Luckily, given the subject matter, Richard Fortey's book is full of such simple analogies and I'd recommend it to anyone trying to understand what is taking place beneath our feet.

I just started this volume yesterday, given how little I've read into geology. Have you read the author's work on biology?