J.G. Farrell - The Siege of Krishnapur 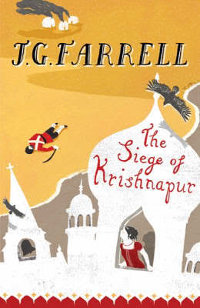 The Indian Rebellion against British Rule in 1857 has had a number of interesting treatments in novel form, I think in particular of Fraser's Flashman novel, Flashman In the Great Game. Both Fraser's book and this one use the comic form to great effect, though Farrell's book is, it must be said, far better.

Concentrating on the fictional town of Krishnapur, Farrell examines the lives of the upper-class English residents there. Years of peaceful rule has left them bored and remote from the locals. Diverted by hunting and dinner parties, as well as the endless search for a marriage partner there are few among them even aware of the changing world around them. Farrell's characters each represent a particular strand of thought, or ideals (though they are never wooden). The central character, The Collector, epitomises the sense of industrial progress at the heart of the Victorian colonial dream. Having been inspired by the Great Exhibition, he has learnt it's catalogue of by heart, and many of the exhibits have made their way to his home. He dreams of the civilising powers of British capitalism, railroads across India and the like.

The Magistrate is his foil, a Chartist in his youth, he cynically notes the excesses of colonialism, but finds his ideals gradually undermined by events, mostly because the rich and pampered people around him cannot comprehend breaking from their lives of luxury. Two different doctors represent the old and the new, their endless debates about how to deal with a Cholera epidemic that strikes the besieged town, highlighting different traditions - the old irrational and the new scientific. The worst though are the women, endlessly fanning themselves and worrying about the servants. Gossiping and shunning those who've broken the complex and rigid social codes that maintain themselves even in a state of war.

And here's where the comedy at the heart of the novel comes from. It stems from the inability of those trapped in the siege to break with their rigid class structures as society breaks down. As the dead and wounded pile up, as food runs out and the poshest of ladies are reduced to eating horses, then dogs and eventually insects, they still argue about who should sit where given their social positions.

By concentrating in this way on this tiny group of individuals, all trying to reshape India in their own way, with their own prejudices, Farrell highlights the racism and arrogance that allowed the British rulers to be so shocked by the great Mutiny. We don't hear the voices of the Indian people themselves often, though occasionally we see how shallow the support amongst event the most loyal of servants is (I particularly liked the servants who gradually put up the prices for cleaning clothes as the siege continues, till even The Collector must wash his own shirts, adjacent to the lowest of the servants).

There is much to this novel - Victorian attitudes to sex, marriage and technology all come under the darkly comic scrutiny of the author. It's a fabulous novel, that will keep you gripped till the end. Farrell does such a good job of painting the central characters as the most annoying, obnoxious colonial representatives you can imagine, I kept hoping the rebels would wipe out every last one of them - but you'll have to see for yourself what does actually happen.

Ward - Our Bones Are Scattered
Farrell - Troubles
Farrell - Singapore Grip
Macrory - Signal Catastrophe; The Story of the Disastrous Retreat from Kabul 1842
Posted by Resolute Reader at 9:50 am