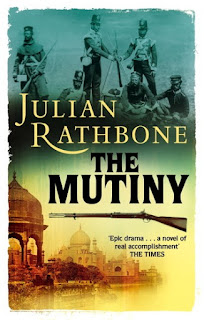 There have been plenty of novels set during the Indian "Mutiny" of 1857. In fact, it was a George MacDonald Fraser novel Flashman in the Great Game that first taught me about this seminal moment in British Imperial history. It shouldn't be a surprise that 1857 has had such a hold on accounts, fictional and non-fictional of British history - it was a tremendous shock to colonial arrogance at the time, and accounts of the barbarity were wildly discussed and stoked, in the popular press. How could formally subservient people suddenly rise up and violently assault their benevolent rulers?

Of course, British rule was anything but benevolent, something that Julian Rathbone skilfully shows in this, his final novel. Rathbone was not afraid of being unorthodox in his books and this one uses a combination of fiction, historical factor, letters and author asides to draw a brilliant portrait of British India on the cusp of rebellion and then during the uprising itself. With a cast of hundreds and a viewpoint that jumps rapidly between different locations, people and even times, it's not a book that everyone will enjoy. Rathbone appears to be using the story mostly to tell the history, rather than letting the history be the backdrop. As a result, characters occasionally make rather irrational choices, simply to make sure they are in a particular place.

In the first half of the novel we follow the fortunes of a couple of families of British officers based in Meerut. When the uprising begins the children's' servant takes them away to escape the bloodshed, ending up near Cawnpore where one of the mothers eventually arrives to try and rescue them. It's convoluted but allows Rathbone to describe the reality of a country in complete upheaval and then look at the barbaric reality of the revolt and the British response.

Rathbone doesn't shy away from the violence arguing that brutality took place on both sides. At least he tries to show why the petty racism, day to day humiliation by the British could lead to violent retribution. He also argues that the main spur to revolt was not a desire to kick out the British, but a reaction against attempts to forcibly Christianise the population. He also spends a lot of time on the detail of the violence which some readers have found difficult, but I thought made the tension at the heart of the book much more real. The besieged people on both sides had a lot to lose.

There are few happy endings to any of the story threads here. Rathbone skilfully weaves history and fiction together (helpfully providing a list at the end explaining who is real and who isn't) and thus cannot escape the fact that things did not end well for the majority of those Indians who rose up. His afterword argues that there was a a lot of good about British rule in India post 1857, though this doesn't really stand up to scrutiny. It is a clever book clearly based on a close knowledge of the historical sources, but unafraid to give a fictional spin on real events (there's a couple of clever allusions to Flashman and the characters Flashman - in both the Fraser and Hughes versions - might be based on). I wouldn't describe it as an enjoyable read, but certainly it's a good one. It might even encourage further reading about the reality of British rule in India.

Farrell - The Siege of Krishnapur
Ward - Our Bones Are Scattered: The Cawnpore Massacres & the Indian Mutiny of 1857
Wagner - Amritsar 1919
Newsinger - The Blood Never Dried
Posted by Resolute Reader at 11:19 am