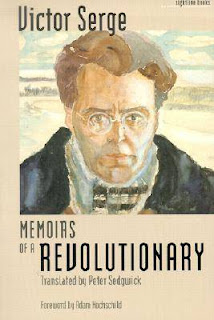 Victor Serge's life was a unique one. His experience of the highs and lows of revolutionary struggle across the globe is one shared by few people. Almost uniquely amongst the famous names to come to global prominence after the Russian Revolution, he actually started his revolutionary life as an anarchist. The early chapters of his memoirs detail the forgotten moments of struggle in Western Europe as he, together with many anarchists who eventually lost their lives and liberties to a brutal state, campaign and struggle against an oppressive system.

But for most readers the real meat of this work of personal history are Serge's experiences of the Russian Revolution. His first taste of the revolution comes following a period of imprisonment in France. The cafes of Paris towards the end of the first world war become centres of debate, discussion and polemic as radicals of all hue's attempt to grapple with the meaning of the Bolshevik lead insurrection.

Determined to see the revolution as a first step in the liberation of humanity, Serge crosses Europe with other exiles and emigres to Russia. When he reaches Petrograd in 1919, Serge is shocked how the city has been emaciated by the ravages of war - both World and Civil.

"We were entering a world frozen to death" he writes, then later "At the reception centre we were issued with basic rations of black bread and dried fish".

The isolation of the revolution and the backwardness of Russia were the twin problems for the Russian workers. The revolutionary leadership had argued that an isolated revolution would never survive and they waited in hope for further revolutions in Europe to save Russia. Serge and those returning with him were constantly bombarded with questions about the state of the struggle in the West.

"They were surer of it then we were, and our doubts made them momentarily suspicious of us. All they asked us was whether Europe would soon be kindled".

Serge grasped quickly, that whatever his differences with the Bolsheviks, they were genuine revolutionaries. The seizure of power in October 1917 wasn't simply an act of bravado, it was at that moment a historical necessity, or the counter revolutionary forces would have drowned the Russian working class in blood. But Serge couldn't quite come to terms with all the acts of the Bolsheviks since taking power. The Checka for instance, the secret police force created to help battle the counter-revolutionary forces took on a life of its own, Serge believed that this meant a layer of bureaucrats were coming to prominence who would destroy the essence of the revolution.

Despite this, and other misgivings, Serge took on a central role in the Communist International - the organisation created to help build revolutionary movements across the world. Present at some of it's most important meetings we have brilliant eyewitness accounts of the debates and discussions, with Serge's own criticisms and arguments thrown in. Serge had a wealth of experience and his understanding of the situation in France for instance, with its reformist parties and trade union groupings was much better than those of the Russians who hadn't grappled with these social forces.

One of the great strengths of these memoirs are the pen portraits of individuals Serge meets over the years. Many of them, like Maxim Gorky, are famous in their own right. Others are simple the individual workers and peasants who made the revolution their own. Serge constantly grapples, questions and debates. That he could do this was a great strength of the revolution and he argues for instance, that the gradual suppression of these rights were one of the issues which helped isolate and undermine the revolution from within. No doubt there is some truth in this, but Serge is painfully aware that there is little other choice in a country ravaged by famine, war and crisis but to try and defend the purity of the revolution from its internal enemies.

It's Serge's great fame as an international author that saves him from the rising Stalinist bureaucracy that kills so many of the revolutions great minds. So many of his portraits of those who played a leading role in the revolution, or strived to make the situation work end with "committed suicide in 1930" or "disappeared in 1931". By this point Stalin had consolidated his power and no longer looked to spreading revolution, instead opting to compete with the capitalist powers on their terms.

After being released from captivity, Serge eventually ends up, like Trotsky in South America. His writings from there document the rise of fascism and the defeat of the European working class. But his last chapters carry with them a great hope for the future battles against capitalism. Despite being labelled as counter-revolutionary by the Communist Parties, he hopes that his own experience and that of his "fighting generation" will have "some small power to illuminate the way forward". These final words are very true and all of Serge's works deserve to be re-read as a new generation of people seek to challenge capitalism once again.