Victor Serge - Year One of the Russian Revolution 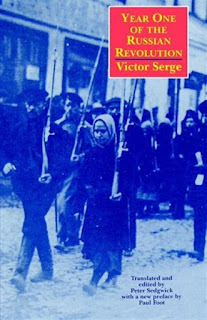 Victor Serge is one of the most important figures to come out of the Russian Revolution. A Belgian/French anarchist he was already immersed in revolutionary politics long before the 1917 revolution, and traveled to Russia in 1919 to see events for himself. Once there he quickly aligned himself with the Bolsheviks and proceeded to both document the revolution and serve as one of its leading figures. A brilliant author his novels and non-fiction are powerful arguments of the need for Revolution, as well as defenses of the Russian Revolution and the Bolsheviks.

Year One of the Russian Revolution is a history of the early years after the revolutionary year of 1917. Serge begins with historical context to the Revolution stressing the importance of the earlier 1905 revolution and Lenin's Bolshevik organisation to the eventual successful seizure of power in October 1917. Serge careful documents the historical development of Russia - the role of the peasantry and their changing circumstances, the industrial development of the major cities of Petrograd and Moscow (often with massive French loans) and then, the collapse of the Russian economy during World War One.

There is a good over-view of 1917 itself, but those looking for a detailed account of this must look elsewhere. That said it is worth noting that one of Serge's central arguments is that the seizure of power in 1917 was not a coup by a minority of revolutionaries, but a movement that was supported by the vast majority of workers and peasants.

But the bulk of the book is a historical account of what takes place in the immediate aftermath of the seizure of power and the start of the counter-revolutionary civil war. The demand for peace is the central question, but a separate peace with Germany provokes the anger of Russia's former allies. Germany itself uses the opportunity to try and seize vast areas of land to obtain more food for its own military forces. In addition, the absolute hatred of the ruling classes for the revolution forms the basis for the begins of the Imperialist assault on Revolutionary Russia itself.

Serge really brings to life the debates of the era. The struggles within the Bolshevik leadership about how best to bring peace, as the likes of Lenin and Trotsky thrash out a strategy to best defend the fledging workers power, are amazing to read, and one can only feel the tragedy of knowing that Russia was to become even more isolated with the failure of the German Revolution. On a slightly less serious note, the account of Trotsky besting the rhetoric of the German generals at Brest-Litovsk are hilarious.

As it became clearer and clearer that the Revolutionary leadership was not going to collapse, the old ruling classes, together with their friends abroad became more and more prepared, in the words of Serge to "view democratic illusions more and more as a watered down variety of Bolshevism. It was waiting for its own moment."

Serge fills this book with little known bits of history. Writing in Russia in the late 1920s he would have had access to sources that few other historians can have read. Despite having read extensively about the period, I have never read of the events in Finland when counter-revolutionary forces decimated a new government installed on the back of a movement by workers in that country. While relatively radical, in that workers were intended to have real input into production and politicians were more accountable than in any other democratic country, this did not stop the whole of the left being smashed by the counter-revolutionary forces. Men, women and children were murdered in the name of re-establishing "order".

Such realities were to form the basis of the counter-revolution and the blood baths that followed the white armies and the imperialist invasions. Serge quotes Leon Trotsky defending the violence that revolutionaries resorted to in defence of their state,


Now that workers are being charged with committing cruelties in the civil war, we must reply, instructed by our experience: the only unpardonable sin whic hthe Russian working class can commit at this moment is that of indulgence towards its class enemies. We are fighting for the sake of the greatest good of mankind, for the sake of the regeneration of mankind, to drag it out of the darkness, out of slavery.

Repeatedly Serge emphasies the violence of the counter-revolution, which purely numerically, had far more enemies that the revolutionaries, and spilt far more blood. Indeed, Serge bemoans the softness of the revolution, which in its early months frequently let its enemies off, despite the most awful counter-revolutionary actions. Only to see them reappear at the head of invading armies months and years later, slaughtering men, women and children. Indeed, "terror" was not the immediate response of the revolutionary leaders, as Serge points out:


The Moscow Junkers who massacred the workers in the Kremlin arsenal [October 1917] were simply disarmed. It took ten months of bloodier and bloodier struggles, of plots, sabotage, famine, assassinations; it took foreign intervention, the White terror in Helsinki, Samara, Baku and the Ukraine; it took the blood of Lenin before the revolution decided finally to let the axe fall! This in a country where over a whole century the masses had been brought up by the autocracy in the school of persecutions, flogging, hangings and shootings!

Reading this during the centenary year of the Russian Revolution I was struck by the contrast between "official" accounts of the Revolution which focus on the "terror" of the Bolsheviks while neglecting the historic context or the violence with which the ruling class tried to regain its lost wealth and power. Serge's book is more than a brilliant history of the Revolution, it is a polemic that reminds us that the ruling class will not give up their position without a bloody struggle. If we want a socialist world, where people are not put before profits, than we will need to learn the lessons of history and be prepared for the violence with which their side will defend their privilege.

The tragedy was that Stalin's rise to power destroyed that vision. Genuine revolutionaries like Victor Serge lost their lives, or fled into exile. When Serge was arrested his unpublished follow up manuscript Year Two of the Russian Revolution was confiscated. We can only hope it remains as yet undiscovered in some former Stalinist vault.

One hundred years after the Russian Revolution, I'm reading, or re-reading, some of the classic works about 1917 - click on the 1917 tag to find these reviews, together with earlier ones published on this blog.