Terence Wise - To Catch a Whale 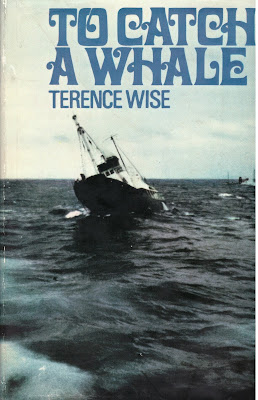 Terence Wise is best known today as the author of multiple books on military history. But in his younger years, after being demobbed in the 1950s, he travelled on the final three voyages of the factory whaling ship Balaena from 1957 to 1960. Wise had no connection with the sea, but a sense of adventure and a love of the outdoors, and his account tells the story of his learning to ropes to being a full blown whaling veteran at the end of his first voyage.

The Balaena was an enormous ship. Purpose built as the main processing vessel for a small fleet of hunting boats, it had a crew of almost 500 men. Most of these were essentially workers at sea. Men like Wise were almost exclusively employed to prepare the ship for the arrival of whales and process the whales themselves. Wise's main job was driving a crane, though he was also directly involved in cutting up and processing aspects of the whales and gives a detailed account of conditions and the work involved.

While this is a fascinating memoir of working life on a factory ship, I found it unpleasant in several places. Wise is acutely aware of problems with the whaling industry. While he didn't know it at the time, the British industry was coming to an end and he was on the final voyages of the Balanea. But from listening to older hands, it is clear that the number of whales has collapsed from a few years previously. In fact he describes an extended period in the middle of the voyage when no whales are found and how this plays with the minds of the crew on board.

But Wise's awareness of whaling and his interest and curiosity about the whales themselves cannot hide the violence of the industry itself. The ship and its crew are coated in blood and oil, Wise vividly describes the stench and the vast number of whales being processed (when they are found). It reads like the massacre it is. Wise also comments on the criticisms of the industry - despite legal restrictions young and pregnant whales are taken, and there is clearly plenty of general destruction. The tenders bringing back whales to be processed actually use whale carcasses as giant fenders to protect the ships. There is also the pollution - rubbish and unneeded equipment, clothing, paint etc is simply dumped into the ocean.

So Wise's book should be chiefly read as an account of a (thankfully) forgotten industry. The mass industrial slaughter of whales ought to be consigned to the history books (and generally has - the much very different hunting of whales in places like the Faroes should not be confused with the industrial slaughter that Wise was involved in). As such, Wise's account is of most interest for its description of life as a whaler/worker on factory vessels. Much of it is a description of tedium, drinking, fighting and discussions about sex. The working conditions are dangerous and deplorable, and Wise at least notes that back on shore the trade unions wouldn't stand for it. Though he seems to think somehow the crew are above complaining.

Most of the men long for shore visits, and in Cape Town and the Caribbean they behave deplorably as they drunkenly cause chaos around the town. Wise at least distinguishes himself by trying to see some of the sites. But actually there are several unpleasant accounts here - Wise receives a Dear John letter on his return journey, though he doesn't seem to see the contradiction in criticising the adulterous affairs of sailors wives and his own visits to brothels. On one occasion he has sex with a 17 year old prostitute. The behaviour of the other crew is also sometimes unpleasant - there is at least one occasion when a group of men (not Wise) sexually assault and abuse a woman. Wise at least is appalled by this himself.

So this is an un-sanitised account of the reality of the whaling industry as it entered its declining years. Sixty years later it reads best as an honest historical account. At times humorous and fascinating, at others deeply unpleasant.

Richards - The World Hunt: An Environmental History of the Commodification of Animals
Kolbert - The Sixth Extinction
Philbrick - In the Heart of the Sea

Posted by Resolute Reader at 5:13 pm